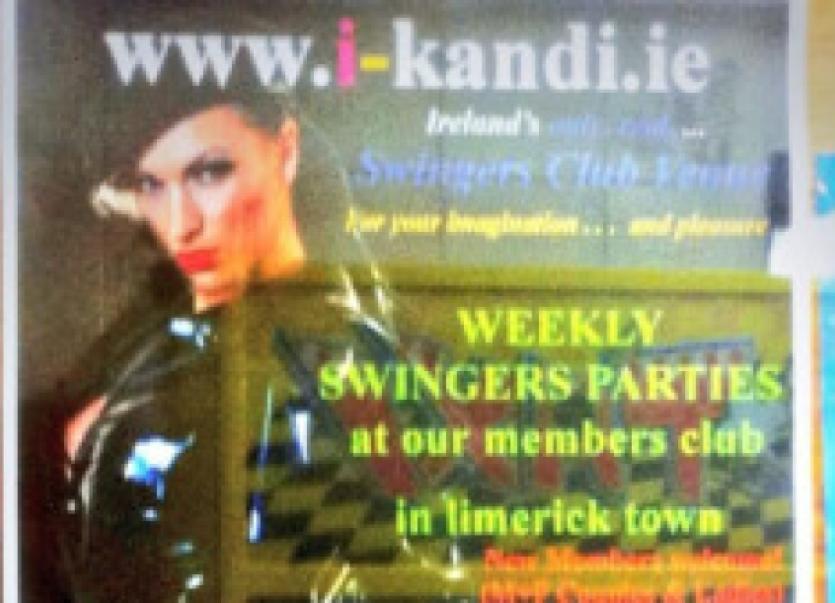 A SWINGERS’ club in Limerick city, pitched as “the home of Irish erotica”, has been “inundated” with job applications, with many highly skilled professionals seeking part time work at the club.

A SWINGERS’ club in Limerick city, pitched as “the home of Irish erotica”, has been “inundated” with job applications, with many highly skilled professionals seeking part time work at the club.

The club, called i-kandi in the Eastway Business Park, is advertising for a ‘shift operator’ in their premises for 20 hours a week, and has received over 100 applications, with more continuing to come in on a daily basis.

The job advert has appeared on the Department of Social Protection website, and prompted one local citizen to contact the department to call for it to be taken down, as he believed it should not be on a Government website due to the “sordid” nature of the business.

However, the advert has remained on their site for a number of weeks and the owners of the business insist what goes on behind their doors is just “harmless fun”, contrary to some people’s perceptions.

One of the company directors said he found the number and calibre of candidates coming forward “astonishing”.

“Honestly, we have been inundated with applications from very highly qualified people looking for work, from engineers to law graduates. It’s a very sad state of affairs to think that so many highly skilled people are looking for part time work,” director Eamon Ryan told the Limerick Leader.

He continued: “The calibre of people we get is very high indeed. We are very grateful for our employees, both past and present, and we do our best for them in any way we can. It’s a win–win situation. We get very qualified, indeed over qualified people, and they in turn get a flexible, part-time job that’s non-stressful, and conducive to furthering their degree or study programmes. We treat our employees very well, we don’t do minimum wage either, and many of our employees have been with us for a long time,” he said.

He said the five-year-old club, which operates seven nights a week and attracts customers from across the country and beyond, is “just like any other night venue” in some senses, “just more ‘European’ in nature”.

“Our customer base is more national and international rather than local. We attract an eclectic mix, of mainly foreigners, into the fetish, and swingers’ club scene. People get to dress a lot more risqué at our venue than at a regular club, but it’s all just harmless fun.

“Our clients tend to find the standard cookie-cutter drinking and rugby scene somewhat boring. We offer a refreshing alternative for mainly home sick foreigners, and a growing number of Irish people that have had their eyes opened up on holiday abroad,” he said.

Mr Ryan said they have never had any anti-social behaviour incident at their venue, which he attributes to the age profile, international make-up of their clients, and also as the club is not largely focused on drinking.

The €9 an hour part-time position covers mainly weekend work, along with some weekday evening work also. Shifts are typically at the weekend, from 4pm to 12 midnight, or 8pm to 3am. The advert states that the job responsibilities include “opening and closing the business during rostered hours; the supervision of customers during the shift, health and safety, as well as retailing, and cleaning.”

It is, they state, an “ideal position for a person with a mature outlook, with good working conditions, and a pleasant working environment offered to suitable, responsible, candidate.”

The facilities include a sex swing, a sauna with mood lighting and movies, TV lounge, and a reception area with an open fire.

The club does not have a wine licence so customers are welcome to bring their own alcohol, with refrigeration facilities in the lounge. Hesitant, prospective customers are also welcome to attend as voyeurs, with some sources describing their night there as a “liberating” experience and “an adult playground”.