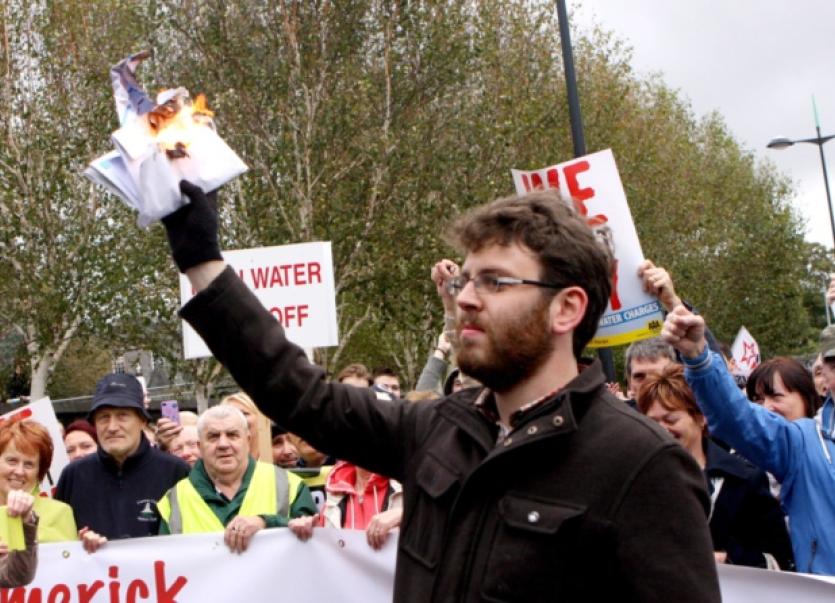 ANTI-AusteritY Alliance councillor Cian Prendiville was forced on the defensive after Mayor Kevin Sheahan raised questions over collections which took place at an anti-water charge march.

ANTI-AusteritY Alliance councillor Cian Prendiville was forced on the defensive after Mayor Kevin Sheahan raised questions over collections which took place at an anti-water charge march.

At this month’s meeting, Cllr Prendiville sought an assurance from council management that tenants will face no trouble from the council, or a threat of eviction if they decided not to pay water charges.

But the city north councillor was instead left answering questions about his own group’s collection methods during a march in late October, which drew almost 6,000 people.

One of those people was Mayor Sheahan who said that although sympathetic to the cause, he was “horrified” to see bucket collections.

“I am very sympathetic with people who are unable to pay the charges. I went to the march, and was horrified to see the organisers with buckets collecting from people cannot afford to pay. It was a most inappropriate moment,” he said.

He asked Cllr Prendiville how much was raised, and what was it used for and where the funds went to.

Cllr Prendiville said he understood around €1,000 was raised on the day - but said the protest would have cost in that region to organise.

“‘We Won’t Pay’ have set up a campaigning fund. People gave money voluntarily. Many people gave €1 or €2,” he said.

Mayor Sheahan asked: “Did you have a permit?”

In response, Cllr Prendiville said: “I am not the treasurer: you would need to ask them.”

On water charges, he said: “In desperation, the government is trying to bully people. They are allowing landlords to take charges from people’s rents. They should be under no illusion that there will be a mass boycott. The government wants to turn council workers into debt collectors for Irish Water. We should register our opposition to this. Council staff have better things to be doing than collecting debts for a semi-state body.”

He says there is now going to be an “inevitable withdrawal” from the government on the water charges.