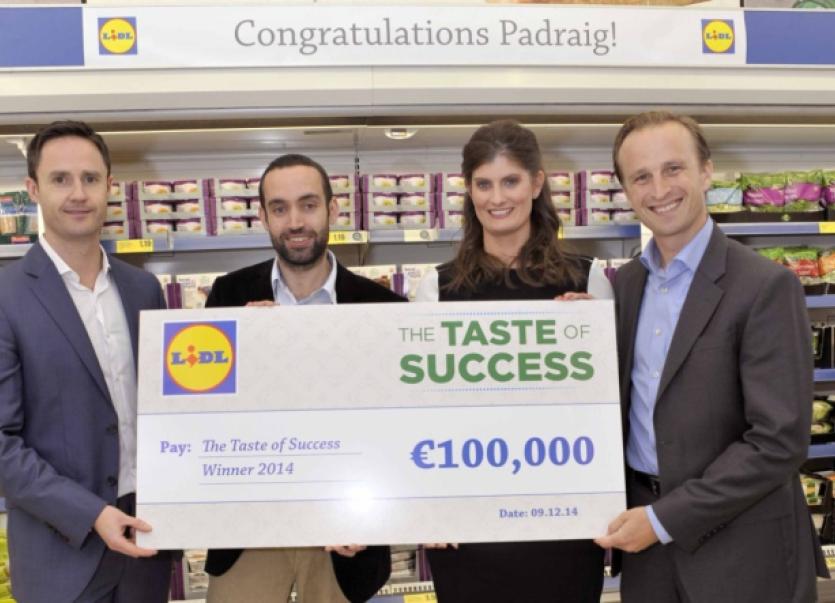 A LIMERICK chef has won €100,000 after winning the TV series The Taste of Success, and will now see his product selling from the shelves of over 140 Lidl stores.

A LIMERICK chef has won €100,000 after winning the TV series The Taste of Success, and will now see his product selling from the shelves of over 140 Lidl stores.

After eight weeks on RTE One, Padraig McCarthy, originally from Ballinacurra but now living in Caherconlish, was declared The Taste of Success winner with his product – Irish beef short ribs with a pancetta and cider sauce.

A number of years ago Padraig had to take a sabbatical from his 10-year long career as a chef, having worked with Adare Manor and Sheen Falls in Kenmare, as well as in the UK and the US, due to a cancer diagnosis, which he successfully battled.

However, he is now on kidney dialysis and is waiting for a kidney transplant.

Asked what he planned to do with the €100,000, he told the Limerick Leader that it’s the question on everyone’s lips.

“I really don’t know. It was never really about the money, even though the money is fantastic - it was about getting back cooking. It’s all I ever wanted to do.”

“I was just trying to take the series as it came along; I wasn’t thinking too hard about it. I had a degree of confidence coming into the final, having got that far, but I couldn’t call it. It was a shock to say the least.

“I’ve been cancer free for over three years now, and am waiting for my transplant, but I’m just getting on with things.

With his recipe, he said he really wanted to focus on Irish ingredients, and Irish beef, in particular.

“The show was great; meeting people from so many backgrounds with such a wide range of products. It really highlighted the food talent and the quality of food we have in this country,” he said.

Lidl license the product from Padraig, and take care of the production, manufacturing and distribution. He is now looking at developing other products.

Liam Casey, associate director of purchasing from Lidl, said they wanted to find a really creative and innovative product for their shelves and “we are fully confident, that in Padraig’s beef ribs, we have the right product.

“It tastes fantastic, is made with quality Irish beef and we have no doubt that this will be a fantastic addition to our Heat Eat and Enjoy range.”

Married to Lisa, Padraig also celebrated on the night with his mother Mary and friends Sean Downes and Ray Egan.

Runner up Creagh Moore’s product – a high protein, low fat chicken broth – ultimately lost in the tense series finale, which he developed to help entice his mother to eat while she was receiving cancer treatment.

RTÉ said an average of over 340,000 people tuned in to each of the first six episodes.