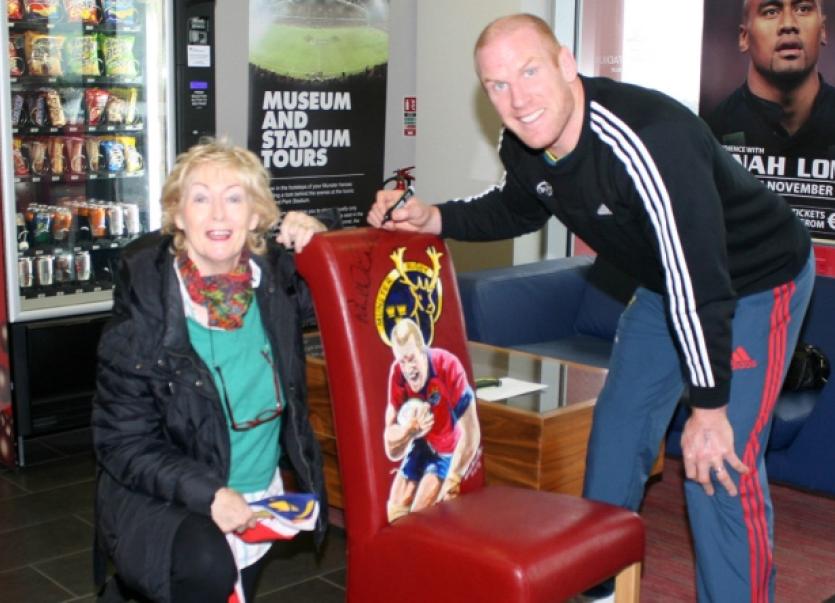 Organisers of the event were “thrilled” with the night as they raised €15,000 for the cause.

Featured in the top 15, of 50 celebrity chairs, the Munster rugby star’s seats sold for €800 between them, according to organiser Maria Nolan.

Fifteen chairs were up for special open auction, while 35 were on silent auction.

“It was an absolutely fantastic night. I was a bit concerned about how many people were going to attend, but there was a great attendance and the people there were just so generous. We made an astonishing €15,000, which was beyond our wildest dreams. On the auction alone we raised €9,240.

“There was great interest for the 15 chairs that were on the main auction. The other 35 chairs were for silent auction. They were on display until 11pm and people walking by could see the bid getting higher and higher for each. At 11pm, the auction stopped. Every one of them were sold, and there was such good will all over the room. It was a very successful evening and there was a disco afterwards,” Ms Nolan said.

She praised the Limerick School of Art and Design’s contribution to the auction, with one student crafting a piece of artwork for a chair dedicated to the Clare hurling team, which sold for €600.

“There were two Paul O’Connell chairs, in fact. The one painted by Una Heaton was sold for €500, while the other one was sold for €300,” explained Ms Nolan.

She explained that the organisers were surprised at the success of the event. Ms Nolan said she has been encouraged by the bidders to run a similar charity event in the future.

“I wasn’t sure how much we would raise. We wanted to raise something in between €4,000 and €5,000. We were hoping to sell the chair for even €20 or €30, because everyone spent around €140 average. But we made €15,000 and the Parkinson’s Association of Ireland were absolutely thrilled with it.

“I don’t think there has ever been a charity like this - a celebrity chair auction - it is just so novel.

“And loads of people were telling me to host something like this again next year. If I was, it would take so long because you have to send the fabric to the celebrities and then they have to send it back and it just takes up so much time,” she said.