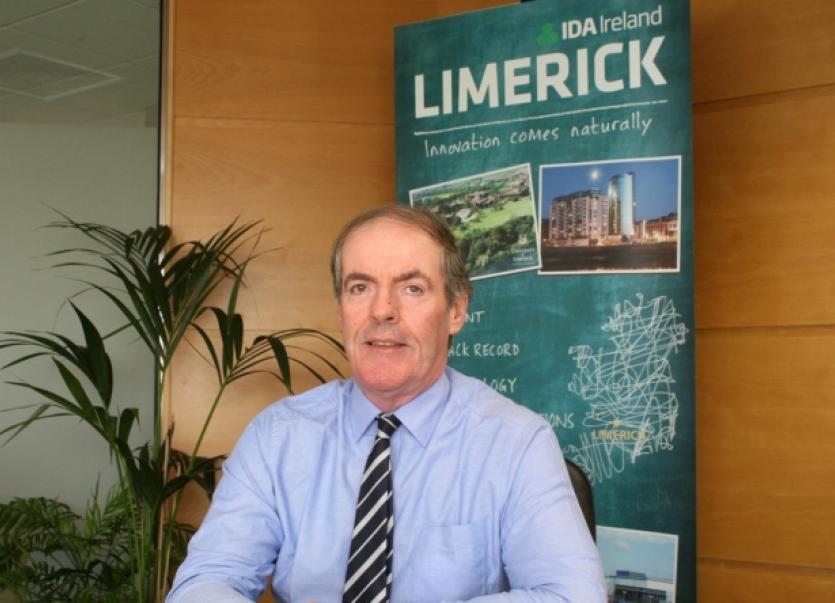 the new boss of the IDA in the region says Limerick can expect a number of significant jobs announcements in the next year.

the new boss of the IDA in the region says Limerick can expect a number of significant jobs announcements in the next year.

But he has warned the county must make sure there is finished office space in which to service new firms coming into the region.

Conor Agnew has taken over as the manager of the job creation agency for the Mid-West region.

He comes to Limerick from a similar role in the east of the country, where he helped broker deals to bring the likes of Google, Ebay, Hewlett Packard and Paypal to Ireland.

This company will establish its new European headquarters in Limerick, with positions available for computer science graduates.

While it is widely acknowledged the American pharmaceutical company Regeneron will be moving into the former Dell manufacturing facility in Raheen creating 300 jobs in the coming months, Mr Agnew says further boosts are on the way.

He said: “We expect a reasonable number of small and medium and one large announcement when the various procedures these companies have to go through are brought to fruition. This is in the short term, and it won’t be too bad an outcome.”

Asked directly about Regeneron, Mr Agnew confirmed that discussions had taken place with the planning authority with a view to the lodging of “potentially a very significant planning application”.

But, he added: “There will be one or two others [projects] that are on the larger scale, where we talk about 100 minimum. There will be a couple of those, and I am pretty confident we will get these over the line.”

Aside from this, the IDA executive - who has more than 30 years experience with the agency - reported that a high number of the companies already in place in Limerick are “falling out the door” in some instances, and are in need of new facilities to fill new positions.

However, he says it is crucial that office space is readily available for businesses - or Limerick could run the risk of missing out on foreign direct investment.

“The thing that has struck me most in my short time here is that there is quite a lot of stock which is half finished office facilities. The lack of fully fitted out ready-to-occupy space is a difficulty,” he said, “It would be advantageous though if we could point out that one of the advantages is ready to occupy space.”

Mr Agnew acknowledged that some employers would never choose Limerick as their primary location, due to the fact they need access to a larger multilingual base, which can only be found in capital cities.

However, he said there is no reason a company cannot set up satellite locations here - notably including financial services firm Northern Trust which announced 400 new jobs here last year.

“Thankfully, what I have found since I came to Limerick is that there is a strong attraction in the compact nature of Limerick as a small city, or a really large town. Whereas in Dublin, things are very scattered, with maybe 50 educational institutes.

“You have to wonder where the level of expertise is in which area? They can be scattered in Glasnevin, in DCU, or over in DIT, or scattered out in different parts of the campus, and at Trinity, or UCD,” he explained.

The difference with Limerick is that everything is within close proximity, and there is one point of contact within each educational institution, he said.

Mr Agnew also highlighted the presence of big companies here already as a real “reference seller” for Limerick to get big firms here.

“You only have to go to Vistakon [in Plassey], and you will see the most sophisticated manufacturing operation in Europe.

“You go to Analog Devices [in Raheen] and you see it is there 38 years. So you are establishing a track record of FDI, so someone coming in knows they will not be the first,” he said.

With close t0 20,000 still out of work in Co Limerick, the IDA boss acknowledged that lower-end jobs are also important.

To this end, he aims to establish a number of positions which are suitable for skilled schoolleavers, including back office functions.

“Our ambition is where possible to have a spread of employment,” he confirmed.