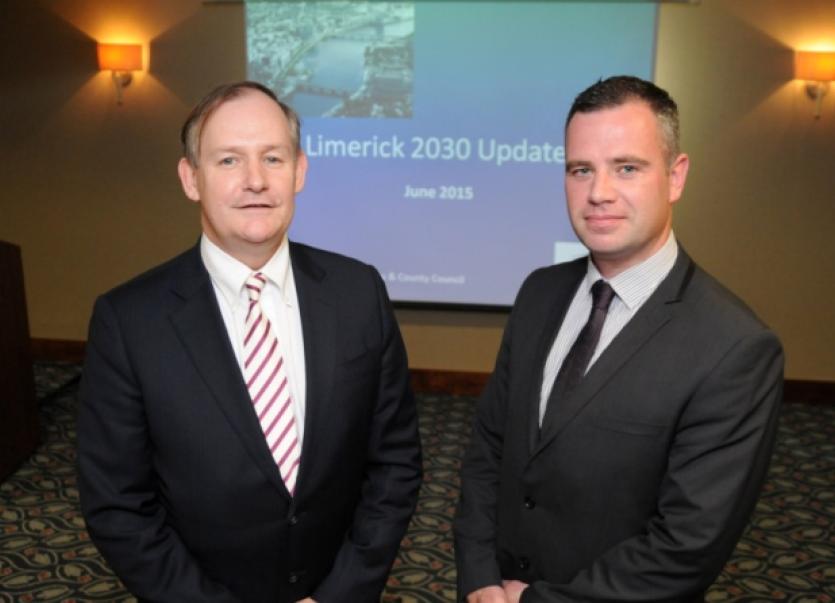 LIMERICK Chamber is teaming up with the local authority in a bid to substantially improve the city’s night-time economy.

LIMERICK Chamber is teaming up with the local authority in a bid to substantially improve the city’s night-time economy.

At a special briefing to give an update on the Limerick 2030 economic renewal plan for the city, chief executive Dr James Ring said the aim is to achieve a ‘Purple Flag’.

This is considered an excellence award for night-time destinations, and has been awarded to Galway, Sligo, Waterford, Westport and Dublin’s Creative Quarter already.

In order to get a purple flag, council and chamber bosses will have to satisfy 30 different criteria including minimum thresholds of decreasing crime, appropriate transport, a stimulating destination and a strong partnership.

Dr Ring said: “I think we can all agree that this is an issue in Limerick currently, and I hope that by this time next year, we will be very close to having a purple flag in Limerick with a truly functioning night-time economy.”

Council chief executive Conn Murray encouraged city businesses to be “innovative” in helping develop the evening economy here, with many complaining the city effectively ‘shuts down’ after 5pm.

“We have to be innovative in terms of what the offering is. I had a number of guests in the city four weeks ago. I brought them up into the city, and we decided to have a coffee at a particular place. But it was closed at 4.30pm. There are realities in terms of what the offering should be. I think there is room on all sides here to be a little bit creative about why it should be attractive to come into our city after 5pm. It requires all of us to think differently,” he told the meeting.

Work to achieve this designation will start in August, Dr Ring added.

Meanwhile at the meeting, Mr Murray revealed the Hanging Gardens site on Henry Street, and construction should commence by the end of the year. In order to service this site, the council has also bought the former Thomond Office Supplies building.

Work to improve Colbert station and its surrounds should be starting shortly he added, and he said the proposed €18m footbridge is something that remains on the agenda.

The council head insisted he was here for the long haul, and while businesses welcomed the Limerick 2030 plan, there were calls for a more immediate plan to support traders now.

These calls were led by Helen O’Donnell, who chairs the Limerick City Business Association, and the proprietor of two Centra branch in the city centre, James Ryan, who revealed his business is eight per cent lower than equivalent branches across the country.

“I can see a bright future for the city post 2020. But we have a tough five years coming up. We need a two-year plan, with parking and entertainment initiatives. But the word ‘footfall’ has to come in there,” he said.

Mr Murray replied that he is prepared to consider all suggestions.