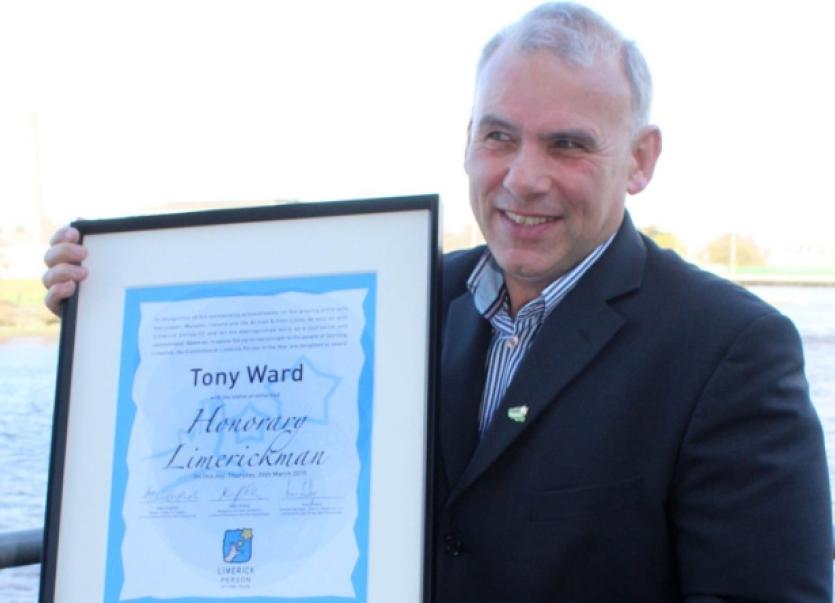 He has been a rugby superstar, FAI Cup-winning soccer player and highly respected broadcaster, but for Tony Ward, being named an honorary Limerickman is his “greatest personal achievement”.

He has been a rugby superstar, FAI Cup-winning soccer player and highly respected broadcaster, but for Tony Ward, being named an honorary Limerickman is his “greatest personal achievement”.

The Dublin native admitted that he was completely taken by surprise to receive such an honour from the city in which he established himself as one of Ireland’s sporting greats.

“Being made an honorary Limerick man means so much to me. This is probably the greatest personal achievement of my life,” he said on receiving the certificate from Mayor of Limerick City and County Kevin Sheahan.

“To receive official recognition here today, honestly it has blown me away.

“I did not expect this and you have no idea the pride I am going to carry being an honorary Limerick man now because this really means so much to me,” he added.

In his citation, Limerick Leader editor Alan English noted that Tony Ward had played for Munster, Ireland and the Lions as well as winning two Munster Cup medals with Garryowen and being named European Player of the Year.

“His sporting memories in Limerick are not confined to rugby. He was an absolutely fantastic soccer player as well,” Mr English added, noting that ‘Wardie’ had won an FAI Cup medal with Limerick United in 1982.

“The impact that he made on the people of Limerick when he came here in 1974/75 was absolutely profound and that is why people still think he is from Limerick,” said Mr English.

Despite his sporting achievements, however, Mr Ward remained a very humble man. “The best rugby heroes we have had in Limerick have been humble people, like Paul O’Connell, and Tony Ward is a true Limerick rugby hero who has those qualities as well,” Mr English noted.

“These days, Tony is a highly respected rugby broadcaster and journalist and in recent years thankfully he has won a two year battle with prostate cancer. For the people of Limerick though, Tony Ward has always been, and will always be, a winner”.

For his part, Mr Ward said he had very fond memories of the ten years he lived in Limerick. “To this day, everywhere I go people assume I am Limerick-born. I am very proud of that fact,” he said, noting that there was a passion for sport in Limerick that was not equalled anywhere else.

He paid special tribute to his former Garryowen team-mate Frank Hogan whom he described as his “adopted father” when he arrived in the city for the first time. “Over very many years, Frank has been very special in my life,” he added.