Dunnes Stores workers in Limerick take to the picket line 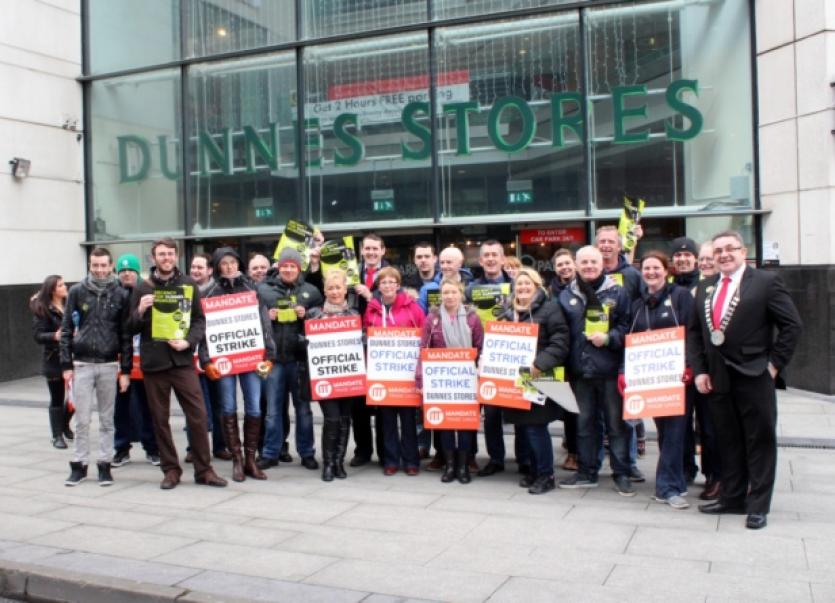 AN estimated 400 Dunnes Stores supermarket workers are out on strike in Limerick today protesting over a lack of security at work.

AN estimated 400 Dunnes Stores supermarket workers are out on strike in Limerick today protesting over a lack of security at work.

Pickets were set up outside the four Dunnes outlets in the city from start of business this morning, while the aisles in the stores themselves were deserted.

The staff represented by the Mandate Trade Union have voted to go on strike over issues including a lack of guaranteed hours at work, fair rates of pay and right to representation in the workplace.

Staff on the picket at Dunnes’ city centre store in Henry Street were supported by fellow members of the trade union movement, plus councillors from Sinn Fein, the Labour party and the Anti-Austerity Alliance.

Caherdavin lady Amanda Skelton, who has worked with Dunnes for 13 years, said the company had “tried to play us off against each other”.

“People who have contracts and good hours they gave full hours to today. They gave the flexis (part-time workers) three hours. So we lose out on a full days pay, whereas the flexis only lose out on a couple of hours. So they have tried to play us off against each other. But hopefully we will get loads of support, and Dunnes Stores will listen to us,” she said.

Amanda said she was standing in solidarity with part-time co-workers, who “cannot get car loans and mortgages.”

Another worker, Sandra Mitchell from the city added: “We are getting great support. I think people did their shopping yesterday. They are saying ‘fair play to us’. and they hope we get a good response. Hopefully it will have the desired effect.”

“I am going to be docked a day of wages, but it is only one day. You have to do what you have to do,” she concluded.