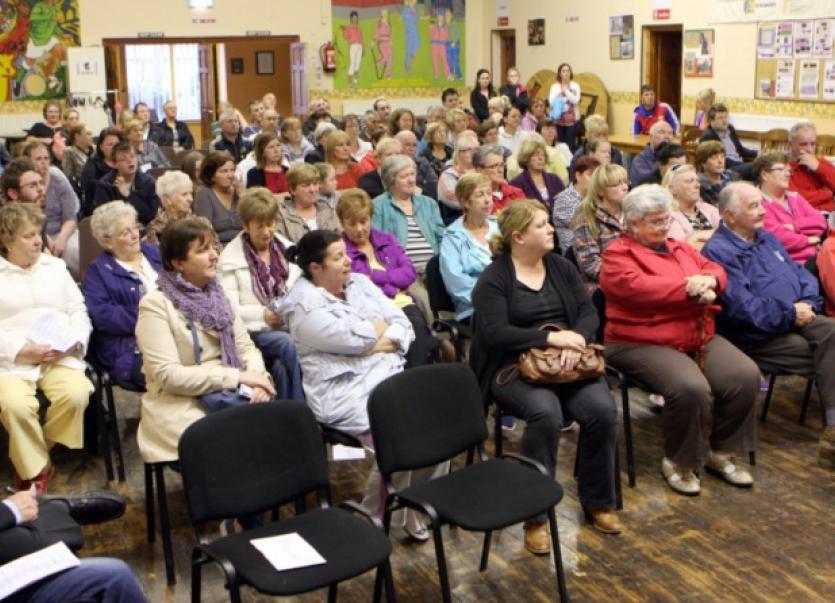 “THERE is so much lead in this water, we are thinking of bringing it out to Richard Hegarty’s to get it weighed”.

The words of one of more than 50 angry northside residents who gathered in St Lelia’s Hall in Ballynanty for a meeting over the area’s water crisis.

Organised by the PAUL Partnership, and members of the community, the event was designed to give residents the lowdown on the schedule of works to take place in the area, a list of the houses unaffected, and the health impact on residents.

But the two main protagonists, in the shape of Irish Water and Limerick City and County Council, did not respond to an invite to attend the meeting leading to anger in the hall.

For the last month, residents of some 400 homes in Ballynanty have been advised not to drink their water due to an elevated level of lead in the supply.

They were joined last week by people in the neighbouring Kileely estate.

Many concerned parents were upset at being denied blood tests for their children by local doctors to detect if the consumption of lead had caused any negative effects.

Mother-of-four Anne-Marie Doyle, of the Shanabooly Road, said: “We are being put on a two month waiting list to go to the regional hospital to get our blood taken. Why are local doctors refusing to do the tests?”.

Her neighbour, Anne-Marie O’Leary, is deeply concerned about the impact the lead levels in the water will have on her youngest son Peter.

Since his birth three years ago, the youngster has had to make regular trips to Crumlin Hospital after he was born with enlarged kidneys, and had blocked access to the organs as a result.

She says she was told her supply was safe, but is sceptical.

“I don’t know what impact this could have on Peter. Water gets into your bones and tissue, and we just don’t know how it might have affected him,” she said.

However, local GP Ray O’Connor was on hand to try and calm the nerves of residents.

“The only safe level of lead is no lead at all,” he said, “Less than ten people requested blood tests [to me] in the Kileely/Ballynanty area, and in all ten cases, the lead levels were undetectable”.

While parents at the meeting were concerned the consumption of lead could lead to children picking up conditions such as Attention Deficit Hyperactivity Disorder (ADHD), Dr O’Connor played these concerns down.

“Conditions like ADHD are multi-facetal, and do not have a single cause. It is really important to emphasise this”.

He reflected the feelings of many in the audience that representatives of Irish Water should have come to address the community.

The meeting also heard that people who had been warned not to drink from their supply were actually on the new pipe networks, and did not have to go to the standpipes.

One of those who feels she has been left in the dark is Marian Ryan, Monabraher Road.

“They [Irish Water] came to me on July 21, and took one sample of water. They came back to me the following week and took six more. I rang Irish Water to find out what was going on, and they had the cheek to hang up on me. That is ignorance on their part. We are the ones suffering in Ballynanty,” she said.

“To me, it is like asking the SS to investigate human rights violations in Auschwitz. They come up with the answers they want everyone to hear: there is very little information coming from anybody”.

Another concerned local, who did not wish to be named, accused the company of showing “pure contempt” to residents.

He said by not attending Irish Water had given residents the two fingers gesture.

“They have been treating us like this since they have taken over.”

Cllr Quinlivan added: “I am disappointed, but not surprised that they did not come tonight. Irish Water have shown people in this area nothing but contempt. As a public representative, when people contact me regarding problems, I then contact Irish Water. But they never ever get back to you.”

Cllr Prendiville said: “It’s a damn shame Irish Water are not here: but they should be the ones calling the meeting in the first place. It is a disgrace that it has been left to volunteers and community groups to distribute water from the standpipes.”

In relation to this, Ciara Keane, Northside Family Resource Centre, revealed that it takes her staff up to ten hours a day to deliver water to the more vulnerable.

In view of the fact this is unsustainable, she called for a good neighbours scheme to be established.

But some residents are even worried the ‘clean’ water from the standpipes is not safe to use.

Anne-Marie Stacke, Monabraher Road, said: “It is not hygienic. I have seen a horse’s mouth around one of the standpipes.”

As works to remove the lead piping begin this Monday in Ballynanty, Irish Water has finally agreed to meet residents this Wednesday.