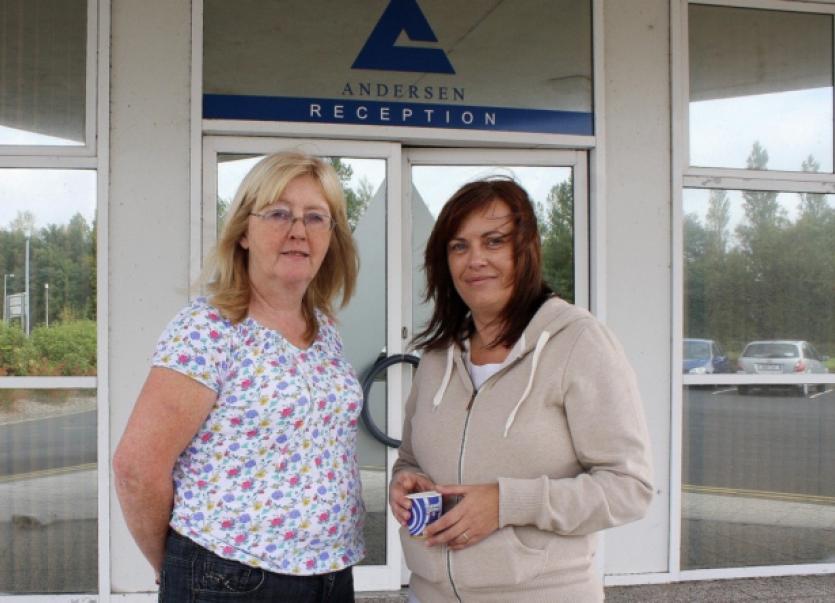 THIS Thursday looks set to be the last day at work for the majority of the 169 workers at Andersen Ireland in Rathkeale, although a small number of workers may be kept on for a a further few weeks.

THIS Thursday looks set to be the last day at work for the majority of the 169 workers at Andersen Ireland in Rathkeale, although a small number of workers may be kept on for a a further few weeks.

A provisional liquidator, appointed by the courts, arrived in Rathkeale this Wednesday afternoon, effectively killing off hope that a new owner could be found and the jobs saved.

His arrival added to the sense of despair and fear felt among the workers, who were already deeply shocked by the collapse, early on Wednesday morning, of the plant’s manager.

Meanwhile, the company’s decision to go to the courts to appoint a liquidator was condemned by the workers’ union Siptu.

“Siptu condemns this practice as unacceptable as some prospective new owners were engaged in the possibility of keeping the business as a going concern,” union official Denis Gormalley said. .

“Our members are hugely disappointed and shocked at the company’s decision to go to the courts,” Mr Gormalley told the Limerick Leader.

Earlier, the union had called on Ulster Bank to appoint a receiver and it has reiterated that call, despite the appointment of a provisional liquidator.

“It is still our understanding that Ulster Bank still has a role to play in this and we have called on the bank to take this window of opportunity and appoint a receiver,” Mr Gormalley said. “But Ulster Bank needs to act to save the jobs and if the bank doesn’t move, the jobs will be lost.”

The receiver, if appointed, could assess any prospects of saving jobs, the union argues while the appointment of a liquidator, they believe, could spell the death knell for the plant.

As things stand, the provisional liquidator is expected to address workers at the Rathkeale plant at a meeting either this Thursday or next Monday.

PL Holdings, the new owners of Andersen, have said they will work with the liquidator. But following talks with the owners earlier this week, workers’ representatives were not convinced that the owners had any real commitment to saving jobs.

“They spoke of an undefined number of jobs for an indeterminate period of time. Ultimately, their commitment doesn’t go beyond that point,” Mr Gormalley continued.

“They said there was no movement in their position. The company cited unacceptable losses and over-capacity for their decision to close, saying that an anticipated increase in sales did not, unfortunately, materialise.

Any hopes that a good redundancy package might be salvaged from the debacle were also dashed during the talks.

“They seem to believe that fulfilling their obligations on statutory redundancy was more than adequate, which sickened our members,” Mr Gormalley said. When this was reported back to the workers, many of them cried openly, he said.

“The workers feel that this faceless overseas management has shown no decency or respect to them and they families.

“They have given no consideration to the condquences of the decision to close the plant without pursuing all possible avenues of maintaining its operation.”

In a separate development, Mr Gormalley said that some “small but significant progress” had been made with state agencies in attempting to find a new owner. The liquidation process kills this possible hope.

The manager, Tom Griffin, who was brought to hospital following his collapse on Wednesday morning, is understood to be comfortable.