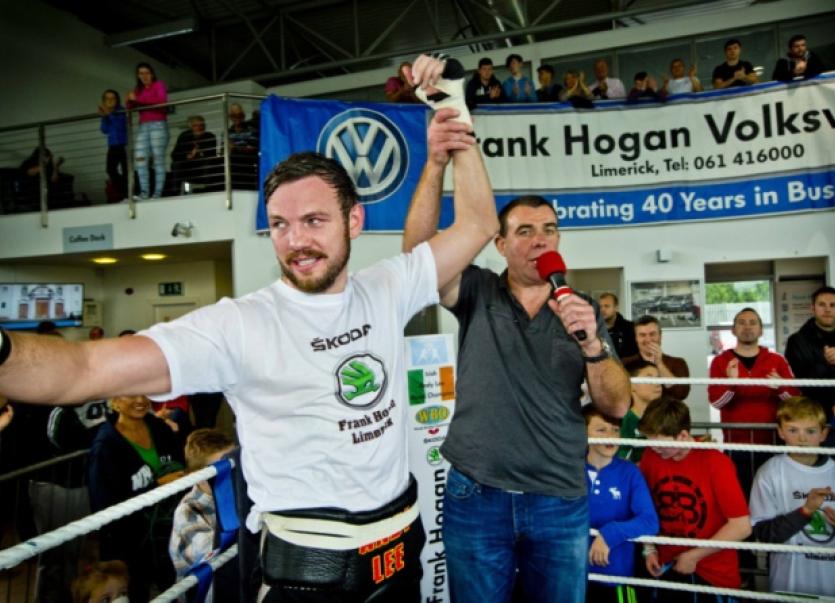 ANDY Lee was in fighting form as he put on an “electric” showcase of boxing skills over the weekend for some of the many fans who had been looking forward to seeing his now cancelled world title defence at Thomond Park.

ANDY Lee was in fighting form as he put on an “electric” showcase of boxing skills over the weekend for some of the many fans who had been looking forward to seeing his now cancelled world title defence at Thomond Park.

The event was organised by Frank Hogan’s garage on the Dublin Road and Ron Hogan described the atmosphere in the showroom as “electric”. The Castleconnell champ entered the ring to take on three of Limerick’s top boxers, in front of an enthusiastic local and international fan club.

Andy’s entertaining exhibition included warm-up exercises and pad work with his former St Francis’ boxing club coach Ken Moore, followed by exclusive two-round sparring sessions with St Francis’ captain Derek Duhig, Rathkeale’s Irish champion Cormac Long, and former pro Jamie Power. It was the first time Ken Moore did a work out with the former Olympic boxer since he turned professional in 2006, and he said that Lee has since gained “exceptional, explosive power”.

Around two weeks ago, coach Moore said, he received a phone call from the champ looking for a boxing ring. He said he wanted to put up a show for the fans who missed out on the much-anticipated Thomond Park fight against Billy Joe Saunders, which was postponed to later this year and to be held in Manchester.

“We had a boxing ring, so we were more than happy to give him the ring. He came back and asked me would I do a bit of pad work, and I said that would be no problem. He came back the third time, chancing his arm, and asked me if I could arrange some guys to spar with him,” he explained. That was when former pro Jamie Power, who once boxed out of St Francis’ as an amateur, got the phone call to return to the canvas after a five-year hiatus. He admitted that he was nervous before entering the ring, but said that he was proud when he realised he could still get the crowd excited.

He said that he felt Lee “going easy” on him, but he admitted that he wanted a tough two rounds.

“I whispered into his ear and said, ‘Let’s give the crowd some entertainment, let’s go for it,’ and we let loose and we both smiled. He gave me a cracking left and gave me a smile, and I said, ‘No, come on let’s go for it!’ And the crowd really got into it. And I really enjoyed it.

“I was so used to sparring Andy as an amateur, so I am one of the few people who has sparred him as an amateur and a professional, and you have two different fighters there. When he was an amateur, he was all about getting the points and all about speed. Now, he still has the speed, but now you can feel the power,” Jamie said.