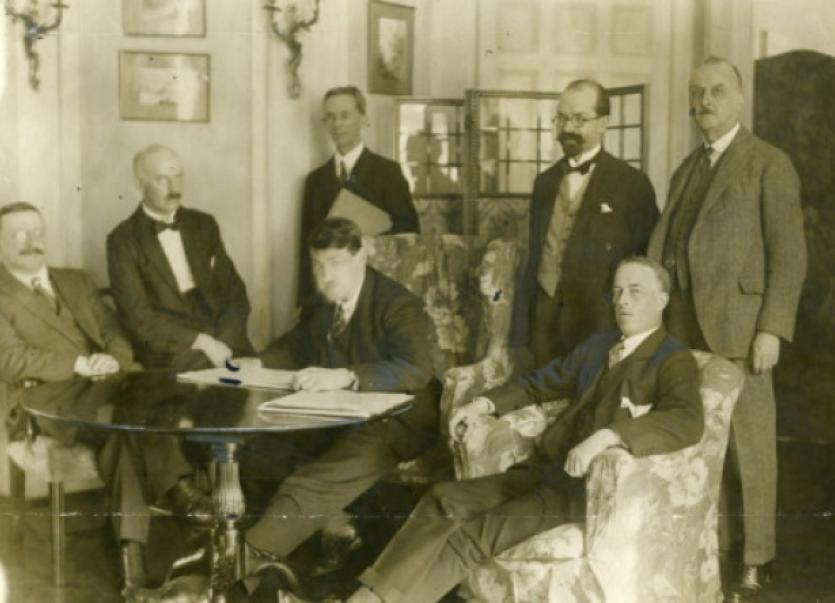 aN “extremely rare” document written during the time of King Charles II’s reign in Ireland in the 17th century has fetched over €5,000 at an auction in Limerick.

aN “extremely rare” document written during the time of King Charles II’s reign in Ireland in the 17th century has fetched over €5,000 at an auction in Limerick.

The document on vellum paper, which contains a painted portrait of the King, was sold in Limerick Auction Rooms on the Ballysimon Road last week, fetching the highest price on the day.

The note gives the consent of James Duke of Ormond to Thomas Brightwell for 2,400 acres in seven towns and villages in County Waterford.

Over 400 lots were up for auction on the day, including an Easter Rising gold plated silver medal issued to those surviving in 1966 on the 50th anniversary of the Rising. It fetched €1,650.

Another rare image of significance to Irish history was a previously unseen press photograph of Michael Collins during the Anglo Irish Treaty negotiations, looking directly at the camera.

It was among 17 rare black and white press photographs, taken by Fleet Street and the Daily Mail photographers, and fetched a price of €1,300.

An image of women praying for Kevin Barry outside Mountjoy Prison, before the 18-year-old medical student was hanged in November 1920, was expected to fetch between €500 and €1000 on the day. It went for €340 under the hammer.

One image shows three IRA men arriving at Colbert Station, during the Limerick Mutiny, and the back of the photograph bears the note: “Reinforcements are arriving for the Republic forces in Limerick and the invaders have commandeered the Shannon Rowing Club. Meanwhile the loyal forces of the IRA are being steadily reinforced”. It went for €100 in last Wednesday’s auction. A photograph of the burning of the Customs House in Dublin in May 1921 went for €170.

Darren Parish, of Limerick Auction Rooms, said these unique images came to the attention of the auction rooms after a Limerickman, who had lived in London for many years, showed them his “monster” collection of memorabilia.