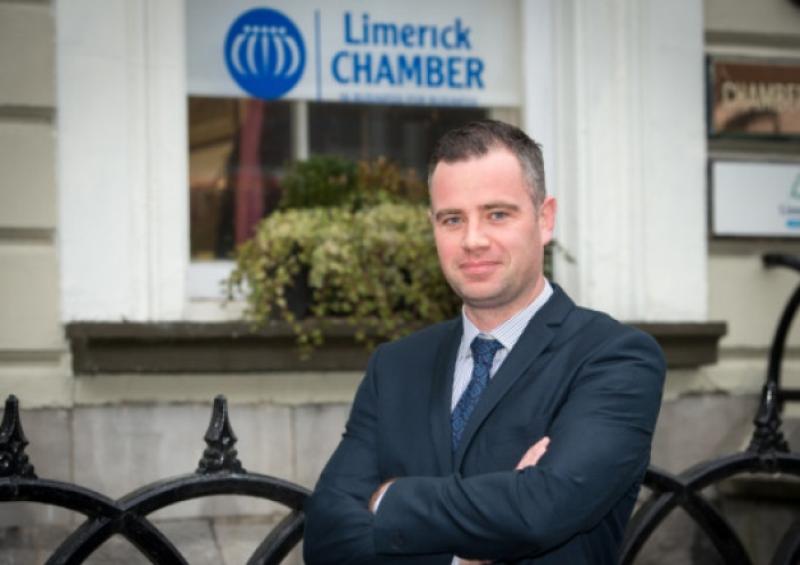 THE Limerick Chamber needs to be a more “member-centric” organisation, its new chief executive has said.

THE Limerick Chamber needs to be a more “member-centric” organisation, its new chief executive has said.

Athlunkard Street man Dr James Ring, the former head of the Limerick Civic Trust is settling into his job at 96 O’Connell Street.

He takes over with the representative group for businesses marking its 200th anniversary, jokingly suggesting that perhaps he should have waited until next year to begin.

“It is daunting to say the least,” he said, before outlining plans for the Chamber to hold a garden party in the summer, and a reception with President Michael D Higgins.

Indeed, Dr Ring intends to put his own stamp on the job after succeeding Maria Kelly, who was in charge at the Chamber for almost a decade.

“I am making it my goal to meet as many people as I can over the next few months. What I am going to be doing is developing a strategy to help me understand what the Chamber needs,” he said.

Dr Ring says he wants to use the 200th anniversary celebrations to debunk a perception that the Chamber is only there to back business.

But in terms of business, the new chief executive does want the Chamber to take on a bigger role in terms of the promotion of Limerick, particularly to foreign direct investors.

He said: “The IDA has a job to sell Ireland Inc. The target for investment would be 50% outside Dublin and Cork, and it has never been hit. The answer we get is ‘We can’t refuse a company if it wants to go to Dublin or Cork.”

Dr Ring says it must be the role of the Chamber to “step up” when it comes to promoting “Limerick Inc”.

“Someone has to sell Limerick Inc, and has to be at that meeting to show the interested parties exactly what Limerick is about. Not allow them to get a soft answer from someone in an office, or get any negative comments they may see online. Get them to understand how Limerick is a very different place to what it may have been in the past. Only Limerick people can tell that story,” he said.

Although Dr Ring wants the Limerick Chamber to remain unique, he says it is foolish not to form alliances with neighbouring Chambers up the western seaboard, suggesting links as far north as Sligo.

“I think in this day and age, if anyone decides to stand alone as an island, they are in trouble. You have to stand together.

“Even in the last couple of weeks, we have been in discussions with [Chambers in] Galway, Shannon, Ennis, and Sligo, up along that channel.”

Dr Ring joins the Chamber after a five year spell with Limerick Civic Trust in which he led the heritage body through a tough period in its history.

“It was in a situation where, chiefly down to the economic collapse, its membership had dried up. It needed someone to say ‘look the business has to stop for a second, look what it can do, or else there won’t be a civic trust’. This is what I was brought in for,” he recalls.

With the Civic Trust in a far healthier position than it was in 2010, Dr Ring said: “I felt it was time to move on. I had done what I needed to do, and I needed a new challenge personally”.

Prior to working at the Civic Trust, he was working for another business representative group, the Irish Business and Employers Confederation (Ibec). Having earned a science-based PhD initially, Dr Ring was sent to represent Ibec on the ground in Cork’s pharma hub.

Meeting blue-chip company bosses inspired him to go back to college and study business administration, something he did at the Dublin Institute of Technology.

Born and raised in Athlunkard Street - a place where he finds himself living once again today - Dr Ring is a keen musician in his spare time, and also turns out for his local soccer club, Athlunkard Villa.

“I think I have a couple of years left in me before I have to hang up my boots. The legs are starting to get a bit sore now,” he laughs.

Returning to his main point Dr Ring talks about his “philosophy” around how the Limerick Chamber will operate.

“I am trying to make it a much more member-centric organisation. I want to get members much more involved in how the Chamber runs.”

He welcomed the fact that there was a contest for seats on the Chamber board this year, at a time when many organisations are struggling to fill vacancies.

“The message I would give to any member of the Chamber, or someone who does not think it is worth their while joining, is: Just wait and see. We will be adding a lot of membership benefit.

“What you will see is a more action-orientated organisation,” he concluded.