Glowing review of Limerick city is an online hit 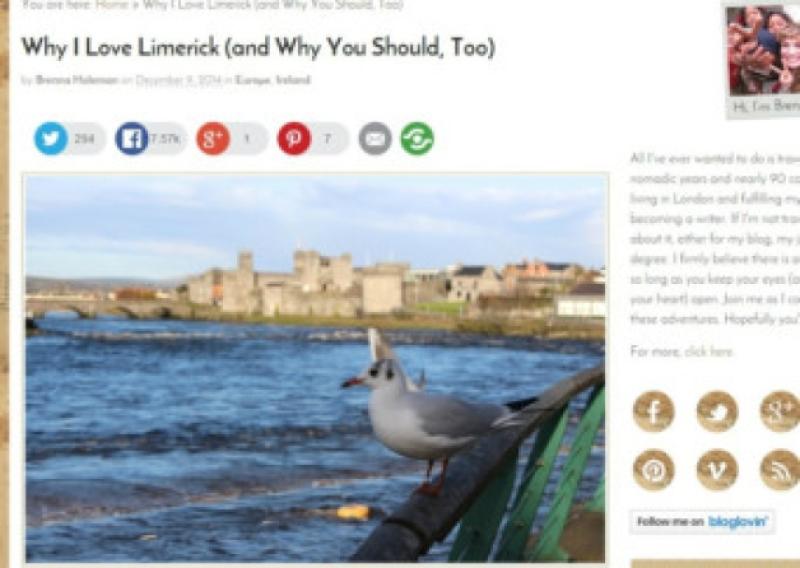 LIMERICK’S once battered reputation has been further consigned to history by a travel blogger behind This Battered Suitcase site.

LIMERICK’S once battered reputation has been further consigned to history by a travel blogger behind This Battered Suitcase site.

And it says something about the pride that inhabitants and even expatriates abroad have in their city when a review becomes such an online hit.

The glowing travel review of Limerick city has had over 20,000 hits since Thursday, has been shared on Facebook over 7,000 times, and has been tweeted nearly 300 times.

Travel writer Brenna Holeman, from Winnipeg in Canada, has travelled to nearly 90 countries in her eight years as a “nomadic” traveller and writer, and she took Limerick to her heart after a recent and by now a much publicised visit, as part of her work with the company Expedia IE.

“I didn’t know much about Limerick,” she admitted. “I knew about the famous five-line poems and Angela’s Ashes, but that was about it.

“I also knew, vaguely, that Limerick had a bit of reputation in Ireland and elsewhere. Because of it, I think that some people choose Dublin or Galway or Cork as a holiday destination instead.

“So, mind open and camera ready, I was eager to see Limerick for myself. I made sure to go there with a blank slate, to let the city write its own narrative for me. And, in only a few short days, I found a whole lot to love about Limerick,” she wrote.

Among the destinations she visited and recommended include the Milk Market, the Hunt Museum, a performance by the Irish Chamber Orchestra in the University of Limerick, St Mary’s Cathedral, King John’s Castle, the Stormy Teacup, Michael Flannery’s bar on Upper Denmark Street, and of course, the full Irish at Bobby Byrne’s for sustenance on her tour.

However, it has the warm welcome she received that meant the most.

“Without a doubt, the people are what made this trip so special for me, and so memorable. Everyone, and I mean everyone, treated me with kindness, hospitality, and genuine interest. From the bus drivers to the bartenders to the people I asked for directions, everyone was sincere in their care and their helpfulness,” she wrote.

Since then she has been inundated with comments from readers thanking her for visiting the city, and for writing a review that reflected many people’s experience.

“It is a hidden gem in the crown of Ireland and your review brought back some incredibly fond memories of the town I love,” wrote one man who has since emigrated to the US.