Andy Lee gets a hero’s welcome at Shannon Airport 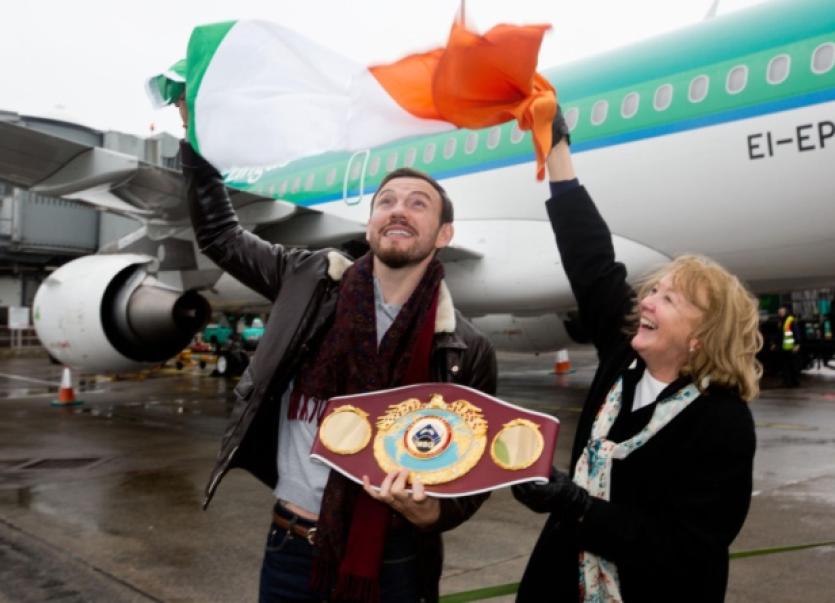 BOXING champion Andy Lee has arrived to a hero’s welcome at Shannon Airport.

BOXING champion Andy Lee has arrived to a hero’s welcome at Shannon Airport.

The Limerick man - reigning WBO Middleweight Champion - arrived into Shannon on Aer Lingus flight Flight EI381 from Heathrow at lunchtime this Wednesday, fulfilling his dream of stepping off a plane with the belt at the airport.

Speaking as he arrived, he said: “I have fantasised of this day, it has been a dream come true. The response I have got so far is amazing.”

Lee’s plane even received a celebratory water cannon salute from the fire service as it landed. Hundreds of people turned out to welcome the Castleconnell man home.

Speaking before her son arrived at the airport, the boxer’s mother Ann said she “dropped to my knees and cried” when her son was crowned world champion, adding that she “can’t sleep” and has a “pain in my face from smiling” since the big win.

Andy beat the previously undefeated Russian Matt Korobov in Las Vegas on Saturday night. A civic reception has been organised to welcome him home to his native Limerick, with the boxer to be presented to the public on the steps of City Hall around 5pm.

Messages of congratulation have been arriving from all over Ireland and further afield.

“It is brilliant for Andy and his family, and I am delighted that Limerick City and County Council have arranged this reception,” he said.

“For a world champion to be greeted by his home town in such a way can only inspire more people to get involved. Andy has worked unbelievably hard to get to this point of his career and I am sure he will enjoy sharing the celebrations with the people of Limerick, who have followed him all the way.”

- Stay with the Limerick Leader for updates on this developing story, and see the print editions of the newspaper for full reaction