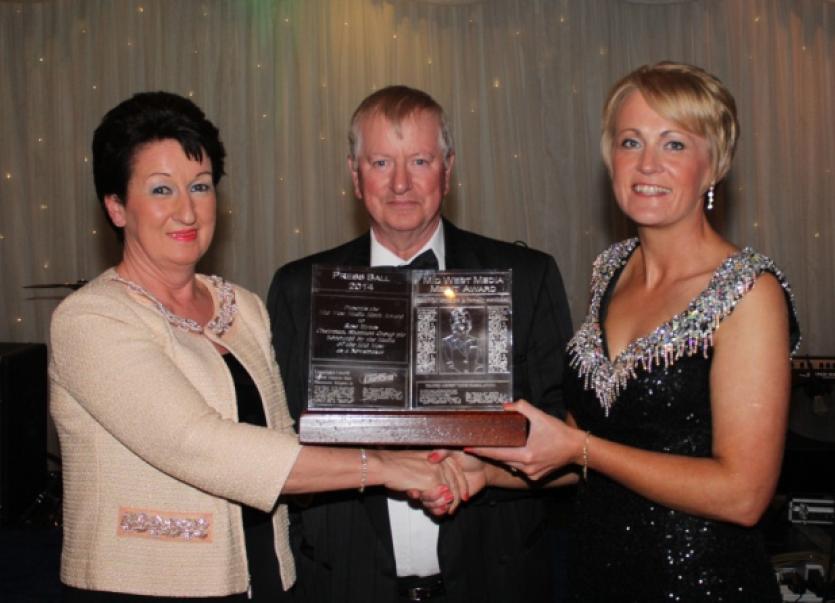 SHANNON Airport chairman Rose Hynes praised the Mid-West’s media for telling the story of “an airport with a new sense of purpose and possibility, the next big thing” at the Vodafone sponsored 2014 Limerick Press Ball.

SHANNON Airport chairman Rose Hynes praised the Mid-West’s media for telling the story of “an airport with a new sense of purpose and possibility, the next big thing” at the Vodafone sponsored 2014 Limerick Press Ball.

“Wooing the press is roughly akin to picnicking with a tiger,” she said. “You might enjoy the meal but the tiger always eats last.”

Ms Hynes received a standing ovation from the nearly 300 representatives of television, radio and print media gathered for the event which has a fundraising cause at its heart and is sponsored in association with Specsavers, Limerick’s Live 95FM and Heineken.

Rape Crisis Mid-West and Cliona’s Foundation are the main beneficiaries.

The Shannon boss received the award just days after the airport picked up its third accolade this year, the European Regions Airline Association award for airport achievement.

She likened the airport’s turnaround – crucial to the recovery of the region as a whole – as equivalent to that of the national economy, and declared that the Government’s decision to unhook Shannon from the DAA had been the catalyst for its re-emergence.

“Shannon is a microcosm of the Irish economy. We are moving in the right direction again and separation was our game changer in that regard,” she said.

“We are galloping forward together and we are only starting to open our lungs.

“You don’t have to take my word for it as to how well Shannon is doing, I met the kindly, caring and supportive Michael O’Leary during the week and he said, in his new cuddly manner, ‘Shannon is going gangbusters Rose. Don’t f*** it up’.”

In announcing Ms Hynes as the winner, Press Ball chairman Ron Kirwan said that the Clare native was a unanimous choice on the basis of her role in leading the turnaround.

“Rose Hynes is unquestionably a newsmaker, locally, nationally and internationally,” he said.

“Rose and her team in Shannon Group plc have restarted the region’s ‘engine of growth’ and the Press Ball applauds her leadership, pioneering spirit and drive to succeed.

“These virtues have already been recognised with global and European awards, and more importantly have impacted throughout the West of Ireland as increasing tourist numbers visit our cities, towns and villages, taking to the Atlantic Way and the River Shannon.”

The ball, attended by over 300 guests, including RTE news anchor Brian Dobson, RTE Managing Director of News and Current Affairs Kevin Bakhurst and media from across the Mid-West region, politicians and business representatives, aims to raise in the region of €20,000 for local charities, also including Console and Focus Ireland.

The Press Ball was first held in 1952 as an opportunity for journalists to meet on a special social occasion and although it faded in the 1970s, it was revived in the 1990s, and the past four Press Balls have succeeded in raising over €120,000 for local charities.

The Limerick Leader newspaper was recognised on the night on the occasion of its 125th anniversary while tribute was also paid to Kay McGuinness, senior partner in Southern Media and Joe Gleeson, former Limerick Leader general manager, for their contribution to the media industry.

Mr Gleeson thanked the Press Ball committee for “honouring me with a presentation for services to the print industry, together with a beautiful presentation piece. I am very grateful.”

Verena Tarpey, fundraiser with Rape Crisis, said: “We are in need of events like this to keep our services maintained and open.

“We were excited to be chosen as one of the main beneficiaries. Funds and our financial situation is obviously a huge factor, but not only that, to raise awareness of our centre in the consciousness of people is also a critical factor for us.”