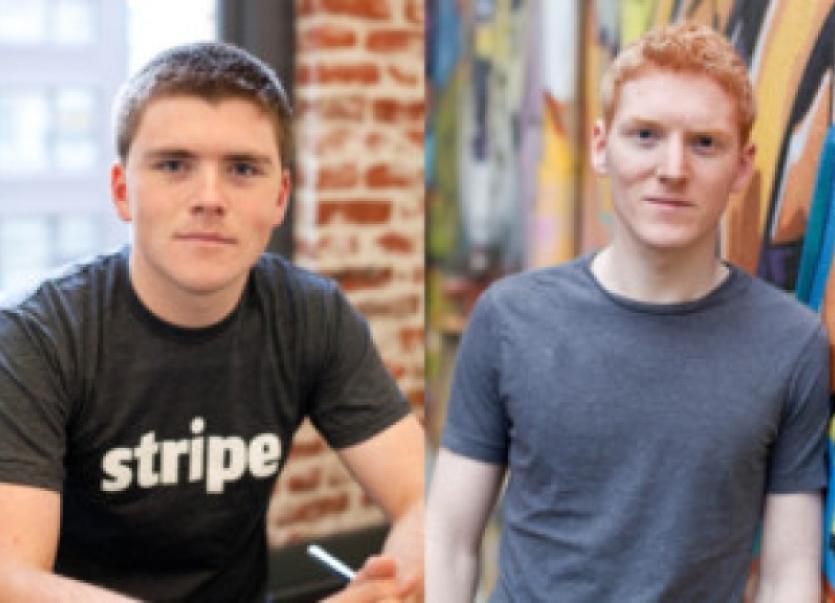 CASTLETROY’s Collison brothers have seen their personal fortune rise by more than seven-fold in the latest Sunday Times Rich List.

CASTLETROY’s Collison brothers have seen their personal fortune rise by more than seven-fold in the latest Sunday Times Rich List.

Patrick and John Collison, now based in the Silicon Valley, have skyrocketed up the list from 166th place last year, with a fortune of around €61m to 20th place this year, with an estimated personal fortune of some €467m – at least on paper.

The former Castletroy College students, aged 25 and 23 respectively, are developing their online payments company, Stripe which is now live in 12 countries. The pair sit at the top of the league when it comes to Ireland’s wealthiest under-30s, ahead of names like Rory McIlroy and Niall Horan of One Direction.

JP McManus remains Limerick’s highest entrant on the annual list, with an estimated fortune of some €663m.

The former bookmaker, 63, remains in 12th place in the countdown, just behind his business partner John Magnier.

Euromillions winner Dolores McNamara remains on the list, in 94th place, and it is estimated that her fortune has grown marginally to €119m year-on-year.

Three places below is property developer Aidan Brooks, who has an estimated fortune of €112m.

Although his wealth has grown from €95m last year, North Circular Road-born Mr Brooks – a director of more than 40 companies – has actually dropped down the list, which indicates the increasing level of wealth required to get on it in the first place.

The former chairman of the Mid-West Jobs Task Force Denis Brosnan retains his place on the annual rich list, with a personal fortune of €60m estimated. Mr Brosnan, 69, secured around €20m in the refinancing of Barchester Healthcare in the last year, and other assets include Croom House stud.

Sitting in joint 183rd place in the 237 place table, Mr Brosnan has also sat on a number of other committees aiding the merger of Limerick City Council and Limerick County Council, which will conclude with the local elections this weekend. Top of the Irish rich list are retail magnate Hilary Weston and her family, with an €8.7bn pile.