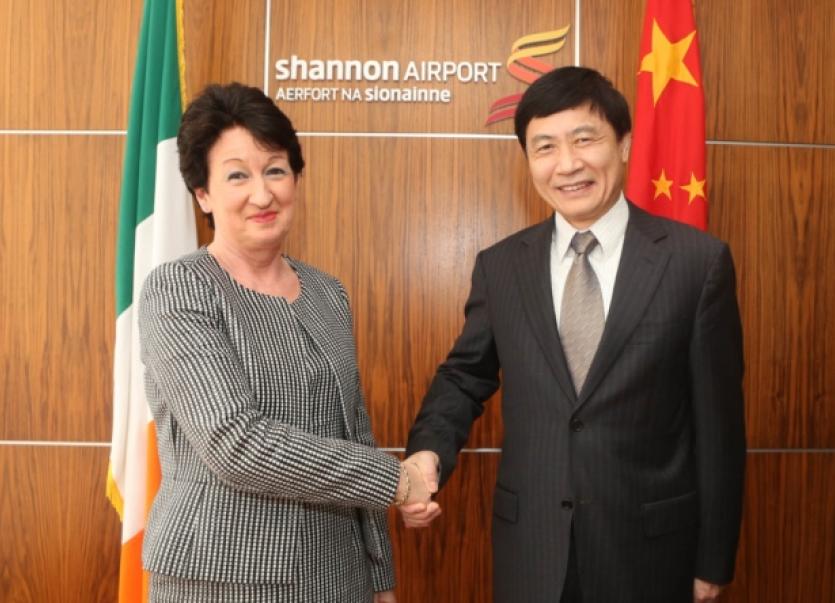 SHANNON Airport chairman Rose Hynes had a “very positive” meeting with the recently appointed Chinese ambassador Xu Jianguo on what was the first official engagement outside Dublin for Beijing’s new man in Ireland.

SHANNON Airport chairman Rose Hynes had a “very positive” meeting with the recently appointed Chinese ambassador Xu Jianguo on what was the first official engagement outside Dublin for Beijing’s new man in Ireland.

It follows the successful visit in December 2012 of the then Chinese vice-president Xi Jinping, who has since been elected president.

“We were delighted that the newly appointed ambassador’s first official visit outside of the capital was to Shannon,” said Ms Hynes after the engagement.

“We had a very positive meeting during which we discussed the very close ties between the regions as well as the opportunities that exist to deepen these in the years ahead.”

Among those potential opportunities is the training of Chinese pilots at Shannon as plans to develop an international aviation centre of excellence around the airport take shape.

Ms Hynes was among those invited to a reception in Dublin on May 6 to mark Mr Xu’s appointment as Chinese ambassador to Ireland. And just 12 days later, Mr Xu returned the compliment with a visit to Shannon.

He heard from Ms Hynes and other members of the management team of development plans for the airport proper, the Shannon Free Zone and the International Aviation Services Centre (IASC).

Shannon’s relationship with the Chinese administration goes back to 1980 when Jiang Zemin - then a bureaucrat who would later become president of China - led a delegation to Shannon to study the Shannon Free Zone model, which has since been adopted across China with the development of their hugely successful special economic zones.

“Jiang Zemin’s visit to Shannon began a stream of visits which saw two Chinese premiers and many Chinese government delegations come to the region to further explore the regional economic development model here. Since then, among those to have visited Shannon were President Jiang Zemin, Premier Zhu Rongji, Premier Wen Jiabao, Vice Premier Huang Ju and Vice Premier Zeng Peiyan,” commented a spokesman for the airport.

It was 18 months ago that Mr Xi jetted into Shannon at the start of his three-day official visit to Ireland.

During his time in the Mid-West, Mr Xi met with Shannon Development and Shannon Airport managers but it wasn’t all business for the then vice-president.

Mr Xi has a keen interest in agriculture and he also took the time out to visit the dairy farm run by James Lynch in Sixmilebridge, where he was treated to an Irish coffee.