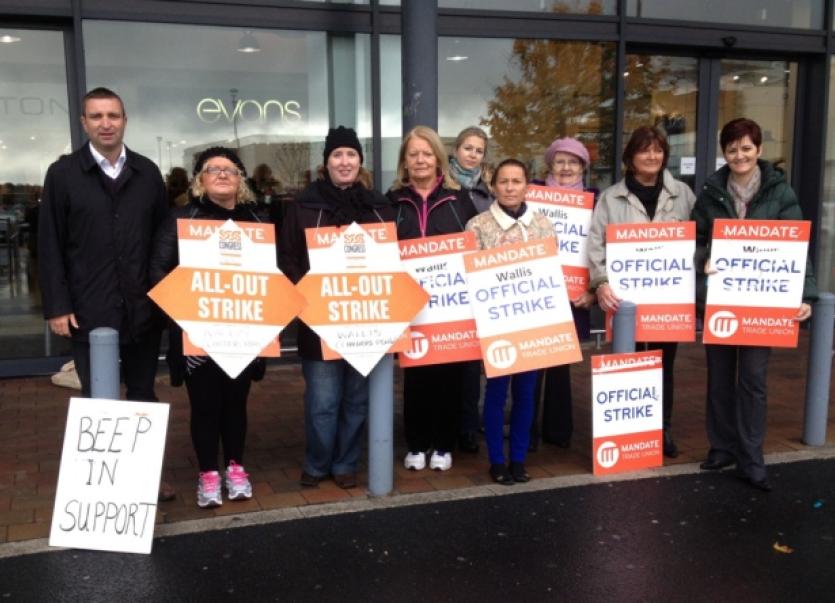 TALKS got under way yesterday in a bid to end a dispute which has resulted in Wallis workers staging a picket.

TALKS got under way yesterday in a bid to end a dispute which has resulted in Wallis workers staging a picket.

Six staff have been made redundant by the Arcadia-owned clothes chain following its decision to close its store in Cruises Street.

And the company is also seeking a handful of redundancies among its staff at the Childers Road.

The company - owned by British retail billionaire Sir Philip Green - has so far refused to meet staff, and the trade union Mandate has said the firm has cut their redundancy settlement from the agreed five weeks a year to under three.

As the local strike reached its one-month anniversary, Arcadia and Mandate have commenced talks.

Staff here have been supported by politicians, and members of the general public, while the Irish Congress of Trade Unions has issued an ‘all out picket’ notice.

This means any union member affiliated to Congress are mandated not to shop in any Arcadia-owned stores.

“I think they have been treated very badly. Staff have given many years of loyal service, and they deserve to much better,” he said.

Mr Collins called for “meaningful engagement” between the firm and staff.

“I don’t want to be getting feedback which represents a cosmetic exercise. They have been hugely resilient. But they have the right on our side, and they deserve all our support,” he explained.

The National Women’s Council of Ireland has also called on its members to support the workers on strike.

Orla O’Connor, director, said: “When families are struggling so much, any loss in earnings will have a devastating impact. Austerity has meant for many women workers reduced hours and earnings. Many workers are facing redundancy and it is critical that they get a fair deal with fair compensation.”