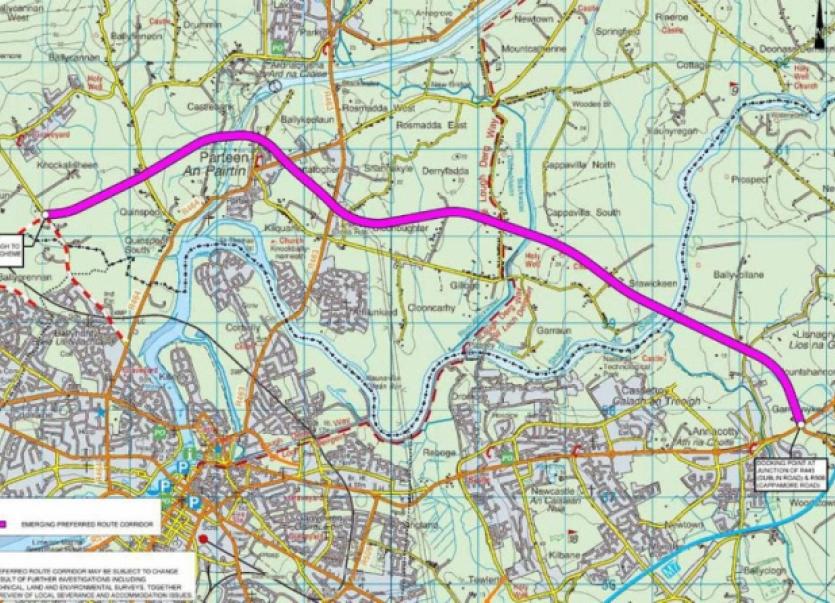 RESIDENTS in Parteen, Clonlara and the surrounding area have expressed “disappointment” at Clare County Council’s decision to vote in favour of the controversial Northern Distributor Road proposals last Friday.

RESIDENTS in Parteen, Clonlara and the surrounding area have expressed “disappointment” at Clare County Council’s decision to vote in favour of the controversial Northern Distributor Road proposals last Friday.

The route corridor of the project’s ‘phase two’ extends from Knockalisheen to the old Dublin Road crossing the Shannon, Blackwater and Tailrace as it winds through Parteen and Clonlara.

Limerick City and County councillors will vote on similar proposals at a special meeting this Wednesday.

A spokesperson for the Northern Distributor Concerned Residents (NDCR) said that Clare County Council had provided a “meaningless set of words” over possible solutions in response to fears that Parteen will be divided in two.

“The council proposed an amendment to include “safe vehicular and pedestrian access” as the solution to the division of the village of Parteen. We reject that this is anything like a solution to the division of the village and question whether the council planners had intended to build a road which did not have safe vehicular and pedestrian access?” the spokesperson said, adding that there is still “no offer of a solution in the public domain to the flood risk we have been highlighting in the parish of Clonlara”.

“Cllr Breen told the council meeting that they were not being asked to grant permission for the road, merely to adopt the plan for the road and allow An Bord Pleanala to make the decision, a view he later repeated in the national media.”

On behalf of the group, the spokesperson said that they would like to thank the councillors “who listened to us and supported us”.

“We are not deflated or defeated by the vote last Friday and will re-gather as a committee this week and assess our future options,” they added.

In a statement, Clare County Council said it had adopted Variation no.3 to the Clare County Development Plan 2011-2017, incorporating into planning policy the preferred route of the Limerick Northern Distributor Road (LNDR) and a Link Road to the University of Limerick Campus, facilitating direct access to UL from County Clare.

“The LNDR route corridor, adopted by the Members on Friday, reflects a long-standing objective of Clare County Council for a Limerick Northern Distributor Route, first included over 10 years ago in the 2005 Clare County Development Plan and further supported at a regional level by the 2010 Mid-West Regional Planning Guidelines and the Mid-West Strategic Area Plan 2012-2030,” said the statement.

“The LNDR will provide direct access to residents, students and employers from County Clare to the University of Limerick and Limerick city. The proposed scheme will also provide significant improvement in connectivity to residents of neighbourhoods within east and southeast Clare, whilst also relieving pressure on the existing river crossings in the City Centre.”

The spokesperson added that “the final consent for the route is subject to the another stage in the planning process, the next step is the commencement of the preparation of a detailed design and Environmental Impact Statement (EIS) for the route.

“The EIS will examine in detail all environmental aspects of the LNDR, including impact on people and material assets, whilst also having regard to the amendment put forward by the Members on Friday that the design ‘provide for safe and adequate means of pedestrian and vehicular access and connectivity east and westwards within Parteen and across the route at this point’.”