Limerick locations were scouted ahead of Royal visit 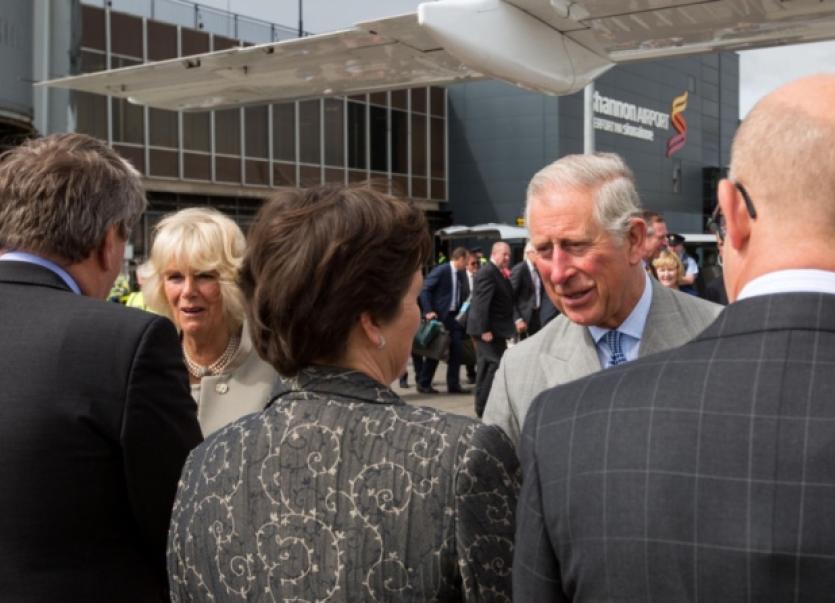 GALWAY claimed the Royal visit this week, but several locations across Limerick were being scouted by officials with the British Embassy in the weeks leading up to the visit of Prince Charles and the Duchess of Cornwall, Camilla Parker Bowles.

GALWAY claimed the Royal visit this week, but several locations across Limerick were being scouted by officials with the British Embassy in the weeks leading up to the visit of Prince Charles and the Duchess of Cornwall, Camilla Parker Bowles.

The future King departed from Shannon Airport at around 11am this Thursday morning, with education minister Jan O’Sullivan among those wishing him well after a historic visit.

Boarding the jet for Belfast at Shannon, Prince Charles uttered three words that summed up his experience: “Special, very special,” he said.

Among the locations scouted in Limerick ahead of the visit to Ireland were the university, King John’s Castle and the Flying Boat Museum in Foynes, and these are understood to have been on a longer “potential itinerary list”, if more time was permitted during the visit of the heir apparent of Queen Elizabeth II.

Margaret O’Shaughnessy of the Foynes museum was among those to meet with the future King at a reception in NUI Galway this Tuesday.

“He said to me ‘I must come back; I’d really like to visit Foynes’. He has a connection to Foynes - the Queen mother’s brother actually flew into Foynes during the war years, and that is documented in our archives,” she explained.

“They were exceedingly nice. When I got the invitation last week I initially thought it was a joke, but I was very honoured to attend,” she told the Limerick Leader.

Representatives of the British Embassy had visited the museum in Foynes in recent weeks, and she was curious to know why, as many people were unaware that Limerick was being considered for the visit, alongside Galway.

“It would have been great if he had come to Limerick, but hopefully there will be another Royal visit. Either way, his visit to Ireland is great for tourism,” she added.

It is understood that King John’s Castle was also looked at during their inspection of destinations in Limerick, as well as the University of Limerick.

Princess Anne, Charles’ sister, previously visited UL, as did Prince Michael of Kent, a cousin of the royal family.

A representative of UL was among those invited to the reception at NUI Galway, along with John Ruddell, chief executive officer of Shannon Heritage, which oversees King John’s Castle and Bunratty Castle.

Limerick-based catering company Masterchefs, run by Pat O’Sullivan, had the honour of cooking the first meal that Their Royal Highnesses, The Prince of Wales and The Duchess of Cornwall, partook of when they arrived in Galway as part of their brief tour of the west of Ireland.

As resident caterers at NUIG, Masterchefs prepared a feast of local produce, showcasing the very best of the region, which they hoped would impress the Royal party.

“We had over 10 chefs cooking up a storm in the kitchens, doing their very best” said Mr O’Sullivan.

“We chose the menu very carefully with the hope that the flavours of the region will remain with the Royal couple long after their visit is over. I hope we have achieved this,” he added.

The couple touched down shortly before midday on Tuesday at Shannon Airport, where Shannon Group chairman Rose Hynes congratulated them on the birth of Princess Charlotte earlier this month.

“We were delighted to welcome the Prince and Duchess here to Shannon and it was another very important day for us at the airport. Prince Charles was very relaxed and was looking forward to his visit. He was very friendly and warm,” she said.

Prince Charles noted that the late poet John O’Donoghue had always wanted him to visit the Burren, and said he was looking forward to seeing the Cliffs of Moher as he flew up to Galway by helicopter from Shannon, which he imagined would be quite impressive from the air.

Speaking after the departure of the Royals, Minister Jan O’Sullivan said that the visit had very much turned thoughts away from the past and to the future.

“I think anyone who watched this trip closely or even from afar will have got a real sense that the Prince of Wales and Duchess of Cornwall genuinely enjoyed themselves,” she said.

“Today, as they departed, it was obvious that that was, indeed, the case.

“The way that they were received by the public and the way they engaged with the public showed just how strong relationships between the UK and Ireland are today. It really is now all about the future and what we can do together,” she added.