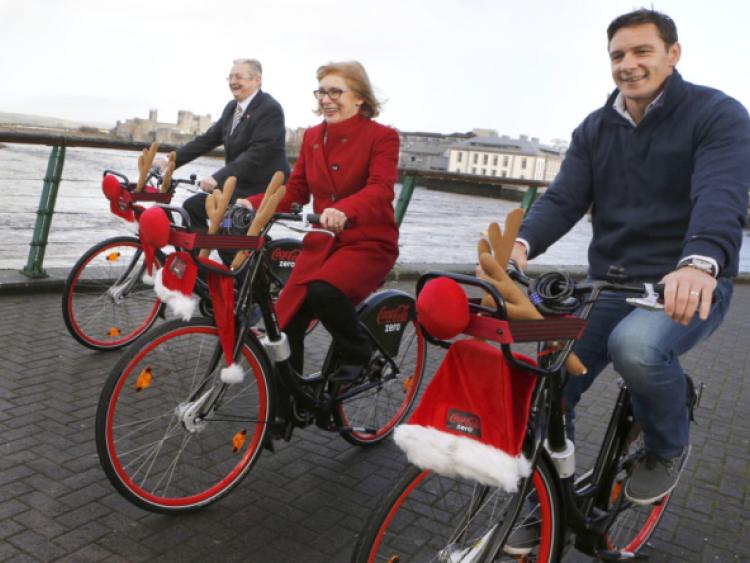 ALMOST 2,000 people have now signed up for the public bike scheme in Limerick.

ALMOST 2,000 people have now signed up for the public bike scheme in Limerick.

The Coca-Cola Zero Bike scheme, which rolled out officially in December of last year, has also had close to 6,000 bike rentals since it was launched.

Four new stations - at St Mary’s Cathedral, Bedford Row, Baker Place and The Crescent - went live last week, adding to the stations already up and running in the city.

Twenty-three in total, and 215 bikes, will be available for use throughout the city area when fully complete.

A spokesperson for the National Transport Authority, backing the scheme along with sponsors Coca-Cola, said: “We’re really pleased with how well the scheme is taking off in Limerick.

“To date, nearly 2,000 people have registered for the Limerick scheme – and this for a scheme that only launched in December,” said the spokesperson.

“As the spring progresses into summer, we anticipate further lifts in those figures. It will be great to see the bikes becoming an integrated part of the many ways in which people can chose to get around the city.”

A further bike point will be added at Colbert station as part of that redevelopment, which is expected to take place this year.

Some 800 people signed up immediately upon the scheme’s launch and it could be extended out to UL and LIT if it is deemed a success and enough people sign up to utilise it. Speaking at the launch of the share scheme, which is also in place in Dublin and Cork, Minister Jan O’Sullivan said it was “fantastic”.

She added: “It is good for a number of reasons, obviously it is a healthy way to get around, it reduces carbon emissions, traffic and generally I think it is a very positive development”.

Deputy Mayor Cllr Maria Byrne told this newspaper at the launch event that “if it works and people start to use it, there is money there to roll out a programme”.

Asked if she would like to see the scheme extended to the colleges - MIC is already included - on the fringes of the city, she said: “Absolutely, I know it is outside Mary I at the moment, but certainly I do think it will be a success and that it will be extended.”