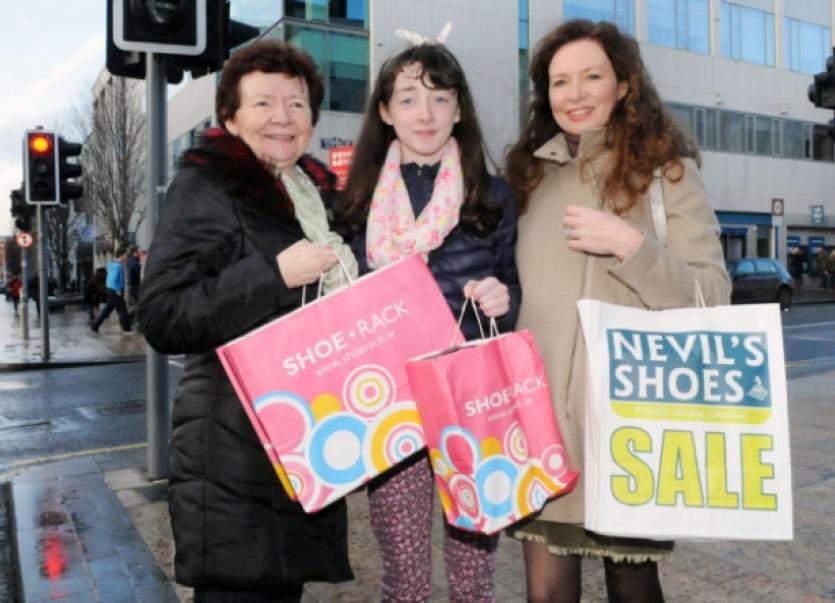 RETAILERS across the city look set to end the year on a high courtesy of a festive spending splurge by bargain-hungry shoppers.

RETAILERS across the city look set to end the year on a high courtesy of a festive spending splurge by bargain-hungry shoppers.

While the lead-up to Christmas was disappointing for some retailers, the Christmas Sales have been anything but so far.

Hundreds of people queued for hours outside stores in the city centre from early on Saint Stephen’s morning in the hope of getting their hands on a festive-bargain.

While some shops and electrical retailers didn’t open until 11am others opened hours earlier as huge crowds gathered outside.

“There were 150 or 160 people outside queuing when we opened the doors at 9am,” said Liam Dwan, manager of Brown Thomas on O’Connell Street.

“Accessories, handbags and womenswear were hugely in demand,” he added confirming that despite the slow lead-up to Christmas the first weekend of this years Sales has exceeded 2013.

“The first couple of days have been very good and thankfully the rain (on Saint Stephen’s Day) didn’t dampen anyone’s spirits” he told the Limerick Leader.

Elsewhere, huge crowds gathered outside other stores such as Debenhams and at shopping centres on the outskirts of the city, where parking spaces were at a premium.

And has become the norm recent years, hundreds of people queued outside the Next store at Childers Road which opened it’s doors at 6am.

Publicans and restaurants across the city also received boost on Saint Stephen’s night as rugby fans enjoyed post-match drinks and food after Munster’s demolition of Leinster in the Guinness Pro12 clash, which was played on Saint Stephen’s Day for the first time.

Sales fever continued on Saturday as those who decided to stay at home on Saint Stephen’s Day ventured out.

“Saint Stephen’s Day is a day to stay at home so we came in today to see what bargains we could get and we got on great,” said Monica Smyth from Killanena, County Clare who travelled into the city for the sales with her daughters Hannah and Rebecca.

While many stores in the city centre did not open on Friday, the majority were open on Saturday.

“I think there is great value this year, we were in Brown Thomas and normally we wouldn’t be able to afford to go Brown Thomas but today we were able to pick up a few bargains and definitely there are few good deals there,” said Yvonne Arrault, Fethard, who was bargain-hunting with her mother, Colette Ryan from Oola.

“I wanted shoes and perfume because I’m pregnant and I can’t really wear anything else so we got want we wanted,” added Yvonne.

Another happy shopper was Tara McNamara (15) from Killaloe who was delighted to have bought a pair of shoes at half-price.

“I went to Lifestyle Sports and it was great because I got shoes which were on sale for €40 - everything was 50% off so it was brilliant,” she told the Limerick Leader.

Three generations of the O’Donoghue family were amongst those loaded down with bags on Saturday afternoon.

“We came in especially because we were looking to get some shoes and boots. There are bargains around in everything but it was just shoes that we were looking at mainly,” said Shirley O’Donoghue who was sales shopping with her mother, Sheila and her daughter, Aoife.

Nationally, it is thought that more than €200m was spend on Friday and Saturday,

Chief Executive of Retail Excellence Ireland, David Fitzsimons, said the sales could not have gone any better with both footfall and spending significantly up on last year across the country.