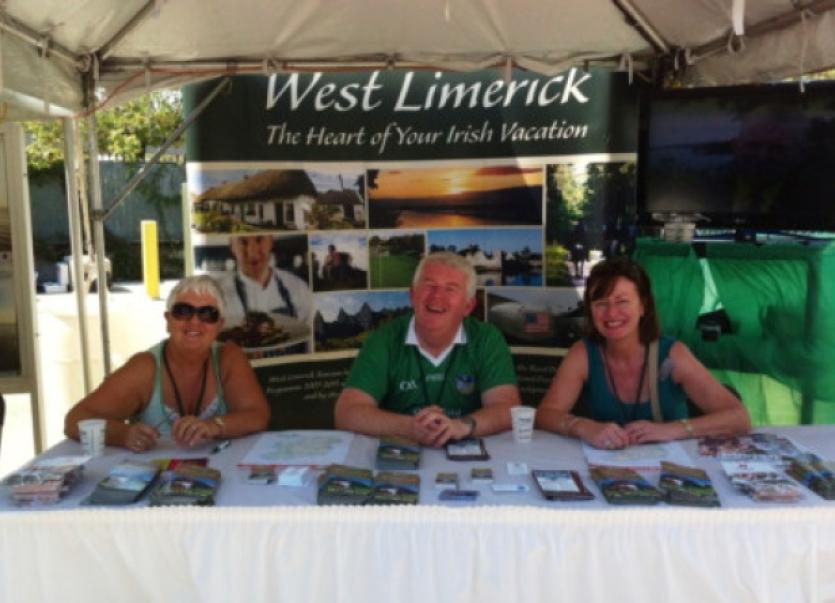 A VISIT to the Milwaukee Irish Fest in Wisconsin, USA could pay dividends for tourism in West Limerick in the coming years.

A VISIT to the Milwaukee Irish Fest in Wisconsin, USA could pay dividends for tourism in West Limerick in the coming years.

Certainly, hotelier David Fitzgerald who is chairman of West Limerick Tourism, and one of a small delegation to visit the festival earlier this month, is upbeat about the prospect of larger numbers of US visitors to the area.

In a pioneering trip to woo additional visitors, West Limerick Tourism sent Mr Fitzgerald, along with Maeve Martin-Kelly of Adare Heritage Centre and Margaret Oâ€™Shaughnessy of Foynes Flying Boat Museum, to the biggest Irish music festival in the US.

â€œIt was fantastic. We were overwhelmed by the response,â€ Mr Fitzgerald told the Limerick Leader this week, on his return. The festival has been running for many years, attracts over 120,000 people over three days and is a mecca for Irish music enthusiasts.

â€œWe made new contacts, contacts with operators and also with the public,â€ Mr Fitzgerald explained. â€œOur main message was the convenience of Limerick as a location, a location that was good as a base to visit Clare, Galways, Cork and Kerry.â€

But the trio were also keen to promote the attractions in West Limerick .

The direct connection between Shannon and Chicago via United Airlines was a big bonus when trying to convince people to visit the area, Maeve Martin-Kelly added.

Of the 1000-plus enquiries they fielded from members of the public, some had visited Ireland before while others were planning to do so.

Significantly, she continued: â€œThere were a lot of enquiries about getting married in Ireland and of course, West Limerick is a very good wedding venue.â€

Clare and Galway sent their own delegations to the festival and Michael Ring, Minister of State at the Department of Transport, Tourism and Sport added his voice to that of Tourism Ireland in promoting the attractions of an Irish holiday.

Over one million American visitors are expected to touch down on Irish shores this year,