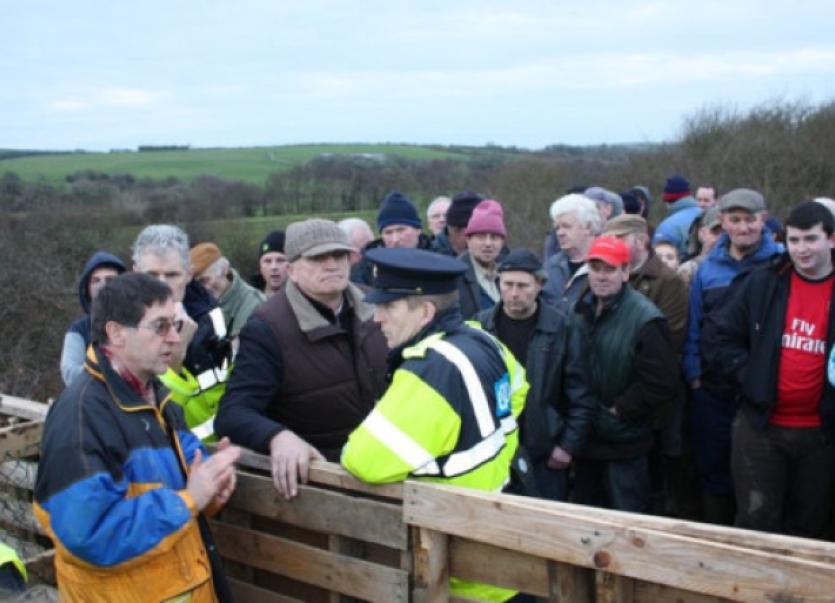 NORTH Kerry farmers who are seeking to block the extension of a public walking trail have been told to produce hard evidence to support their position, or else “back off” and let the matter be dealt with by planners.

NORTH Kerry farmers who are seeking to block the extension of a public walking trail have been told to produce hard evidence to support their position, or else “back off” and let the matter be dealt with by planners.

The row over the planned extension of the Great Southern Trail into Kerry along an old railway line remain at a standstill, two months after a stand-off took place between walkers and Kerry farmers, who erected a barricade on the border outside Abbeyfeale.

The farmers, who have set up the North Kerry Abandoned Rail Line Action Group, are claiming ownership of the old railway line, which could worth up to €1 million. However CIE is insisting that it holds the deeds to the property, which has remained a public right of way.

Liam O’Mahony, cathaoirleach of the Great Southern Trail, has accused the objecting farmers of attempting to “frighten” Kerry County Council out of drawing up plans to extend the trail, which currently runs from Rathkeale to the Kerry border at Kilmorna.

“What’s serious is the tactic to frighten Kerry County Council off, and stop them for applying for grants. North Kerry and West Limerick will both be the losers in this. It’s time for the council to get involved; the time is over for this bluster”.

Mr O’Mahony said that a recent meeting between CIE and representatives of the North Kerry farmers has not progressed the stand-off. He said that while the matter remains undecided, the trail group is being forced to hold organised Kerry walks along the parallel roadside.

Mr O’Mahony urged Kerry County Council to press ahead with a plan to develop the next phase of the track, and said that if farmers wish to continue their opposition they can submit objections through standard channels.

“If you have a claim, back it up, or else back off and deal with it through the planning process. That’s democracy, that’s how the country is supposed to operate”, he said.

Meanwhile, the Great Southern Trail group have invited the descendants of West Limerick and North Kerry emigrants to take part in a special walk in June, which will cover the entire length of the trail from Abbeyfeale to Rathkeale.

Mr O’Mahony said that the walk on June 22 will tie in with the theme of The Gathering, and will allow people of local ancestry to re-trace a route along the old rail line that many locals would have journeyed on their way to emigrant ships in Cobh or Rosslare.

“We’ve been holding this walk for the past two years, this will be the third year. There’s usually about 25 or 30 people who do the whole thing. They get a bit of a buzz out of it.

“The way we see it, it’s an opportunity for people from abroad to walk along the trail and look at the scenery their forebears looked at when they were making their last journey out of the country”, he added.

The walk will depart from Kilmorna at 10.30am. There is a registration fee of €10, but each walker will receive a meal at the end of the day.