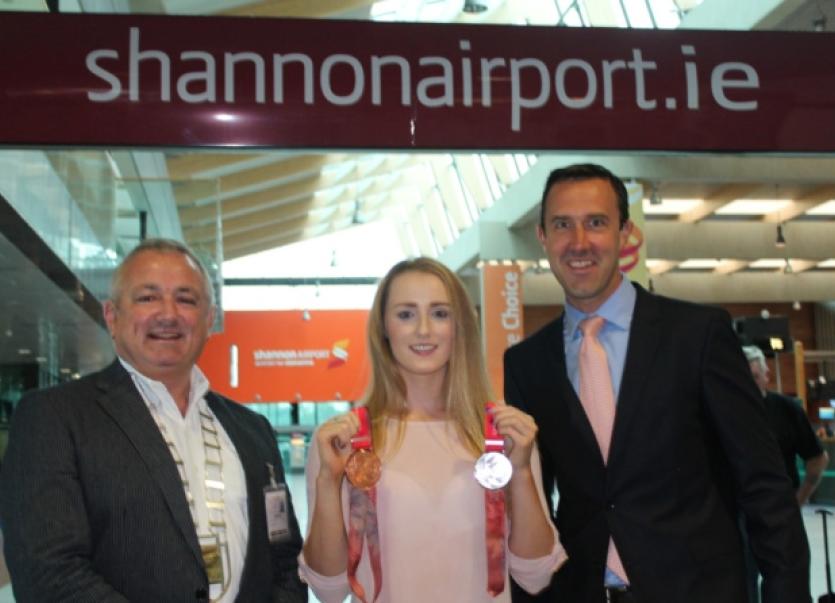 LIMERICK swimmer Fiona Doyle departed Shannon Airport this week, her hard won World University Games medals accompanying her on the flight to Canada, where she will resume a gruelling training schedule.

LIMERICK swimmer Fiona Doyle departed Shannon Airport this week, her hard won World University Games medals accompanying her on the flight to Canada, where she will resume a gruelling training schedule.

The 23-year-old from Raheen flew out on Tuesday, bound for the University of Calgary in Canada, knowing that Olympic qualification is in the bag and the hard work must now begin in earnest.

Fiona secured her place in Rio de Janeiro in some style recently, winning two medals at the World University Games in South Korea last month. She claimed bronze in the 100m breaststroke and silver in the 50m event.

The former Crescent College Comprehensive student will resume training on her return to Canada, where she is studying for a BA in Kinesiology.

“Competing in the Olympics has been my dream since I was twelve years old and once I return to university it will be full speed ahead with intensive swimming and weights training for six and even seven days a week. On average I will be swimming 50 kilometres a week,” she explained on her departure from the airport.

Mayor of the Metropolitan District, Cllr Jerry O’Dea, was on hand along with Shannon’s Chief Commercial Officer Andrew Murphy to see the swimmer off and Cllr O’Dea praised the “tremendous commitment and drive which Fiona has in abundance.

“I am delighted at her success she is a wonderful ambassador for Limerick and Ireland,” he said.

Mr Murphy said Fiona was “an accomplished and inspirational athlete who will do Ireland proud. We would like to wish her every success”.

Fiona trained regularly in UL during her short time at home and her recent medal success capped a fantastic year for the swimmer, who was named High Performance Athlete of the Year for the second year running at the Swim Ireland Annual Awards in the Citywest Hotel in May.

In 2014, she finished seventh at the European Championships in Berlin, when she clocked 31.37 seconds for the event, the first time she had competed in a major international final.