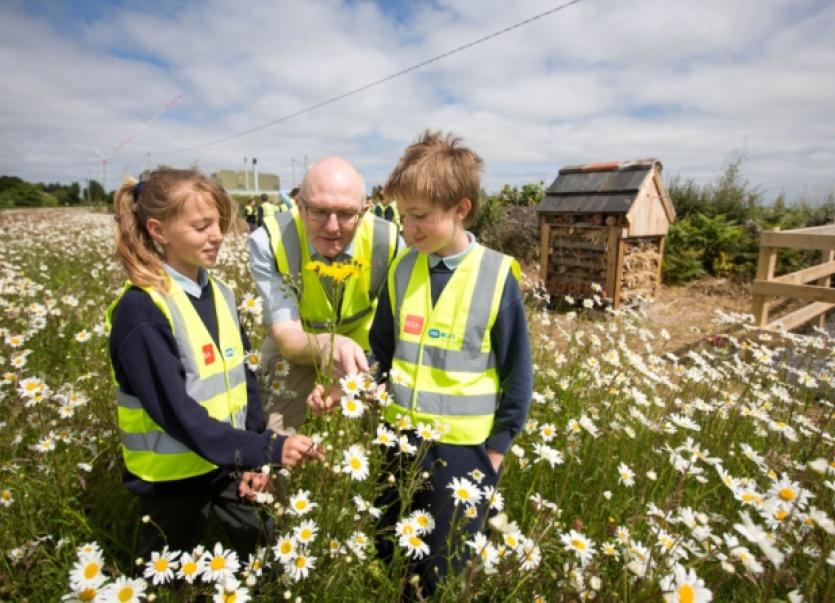 A five-star ‘insect lodge’ has been created in a butterfly meadow next to Nestle’s Wyeth Nutrition plant in Askeaton in a bid to encourage more species to make their home there.

A five-star ‘insect lodge’ has been created in a butterfly meadow next to Nestle’s Wyeth Nutrition plant in Askeaton in a bid to encourage more species to make their home there.

Located in the wild butterfly meadow, the lodge is aimed at enhancing local biodiversity by providing a breeding and hibernation habitat for a variety of insects.

The 1,800 square metre butterfly meadow was created as part of Wyeth’s sustainability programme, as part of which almost 1,900 native trees are to be planted over the coming months.

Brian Shiel, safety, Health and Environment Lead with Wyeth Nutritionals said: “Natural pollinator creatures like butterflies, bees and birds are integral to the food we grow. Their habitats are under threat and we’re delighted that we can play a small role in reversing this trend.

“By restoring the natural habitat of the area we will hopefully see an increase in indigenous species of insects and butterflies in the local Askeaton area.”

The butterfly meadow and ‘insect lodge’ will enhance local biodiversity and encourage an increase in the number and varieties of native Irish butterflies in the area.

Wyeth Nutrition also announced that it is the process of planting almost 1,900 indigenous native trees adjacent to its site and at the butterfly meadow over the coming months. These include Alder, Aspen, Birch, Hazel, Holly, Oak, Rowan, Scots Pine and Willow.

Assisted by the pupils and teachers from Askeaton National School new seeds for the meadow were sown at the official opening of the ‘insect lodge’ and it will be an ongoing educational resource for local schools.

The butterfly meadow and ‘insect lodge’ at Askeaton is a part of Wyeth Nutrition’s overall sustainable strategy which includes reducing environmental footprint and enhancing local biodiversity. This offers a practical way to make a real difference in the local community through enhancing the natural environment and provides a place for school children to come, see and learn on site first-hand about nature.