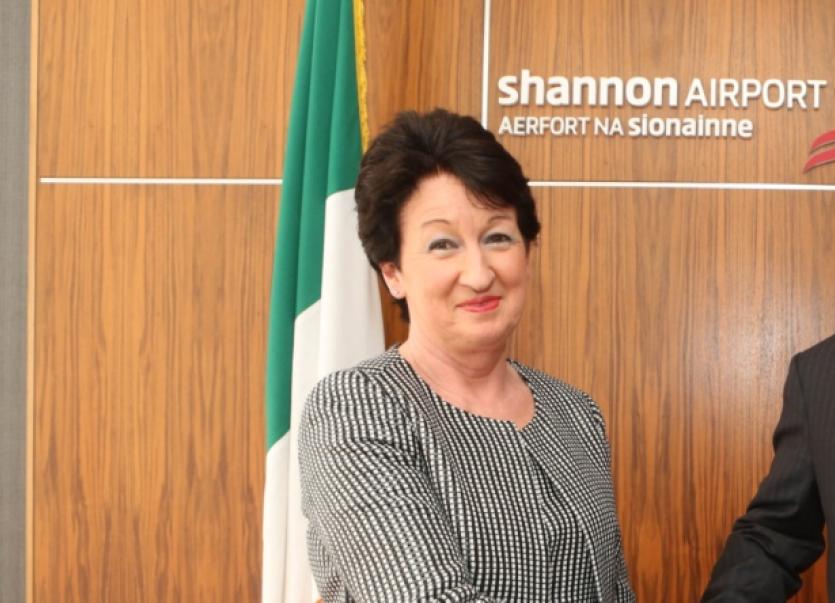 SHANNON Group chairman Rose Hynes has welcomed Enda Kenny’s comments that the government will act “as guardians of the public interest” in deciding whether it should cash in its stake in Aer Lingus.

SHANNON Group chairman Rose Hynes has welcomed Enda Kenny’s comments that the government will act “as guardians of the public interest” in deciding whether it should cash in its stake in Aer Lingus.

And Shannon’s connectivity through Heathrow – and its importance for business and industry in this region – was “a factor we expect government to judiciously measure when considering the more immediate financial gain to the state which the sale would represent,” Ms Hynes said.

After the board of Aer Lingus conditionally recommended acceptance of IAG’s third takeover offer, the government is looking at a windfall of €330 million should it dispose of its 25.1% stake.

IAG, parent company of British Airways, has also said its proposed acquisition is conditional on the government approving the offer. But some analysts this week said there was nothing preventing IAG from taking over Aer Lingus - even without the agreement of government or if the proposal is rejected in a Dail vote. Minister for Public Expenditure Brendan Howlin observed this week that the government was merely a “minority shareholder” in Aer Lingus.

Concern is mounting in Limerick and Shannon this week over what could happen to Heathrow connections if IAG is successful with its bid. In a statement this week, IAG signalled its intentions to run Aer Lingus “as a separate business with its own brand, management and operations, continuing to provide connectivity to Ireland”.

But this does not go far enough for business interests in the Mid-West who want to hear from IAG what they have in mind for Shannon specifically.

Ms Hynes stated: “Aer Lingus is a valued airline partner at Shannon, operating services to our key markets. Heathrow is the single most important gateway for business to and from key international markets for Ireland. It’s essential that current slots and frequencies are retained and contractually protected for the individual Irish airports, including Shannon. I expect the long-term protection of each Irish airport’s Heathrow slots will be a key priority for government in its evaluation of this takeover bid.”

Shannon Airport, as well as Limerick Chamber, will further spell out the case for guaranteeing connections to Heathrow at a meeting of the Oireachtas transport committee on Thursday.

Meanwhile, a senior executive with Cook Medical in Limerick has said the coming weeks could reveal what value the government stake in Aer Lingus actually has.

Bill Doherty, who regards the Heathrow link as vital, said “when you look at it from a business perspective, it would seem to me that if Ryanair, who own 29%, were in agrement with other institutional shareholders in agreeing to the takeover, between them they would have more than 51% of the company”.

“You almost have to come to the conclusion that the government stake is actually not worth anything because if they outvoted, they are outvoted.

“For the minister to even agree to sell his share, it has to be ratified by the Dail. And in that case, if it weren’t ratified for whatever reason, then that is a very strange situation in a publicly held company where a minority shareholder is effectively calling the shots. That would be an interesting scenario but I have no idea how itwould work out,” Mr Doherty said.

Meanwhile, Deputy Willie O’Dea believes the government stake can and should block the takeover.

“The decision of Fianna Fáil government to maintain a strategic and significant shareholding in Aer Lingus was with a view to protecting the country against long term threats to our connectivity. That was the correct decision then and it’s the correct decision now. Dumping this stock in order to create a €300 million plus slush fund to help win the election would be a major mistake that the travelling public will quickly regret,” said Deputy O’Dea.