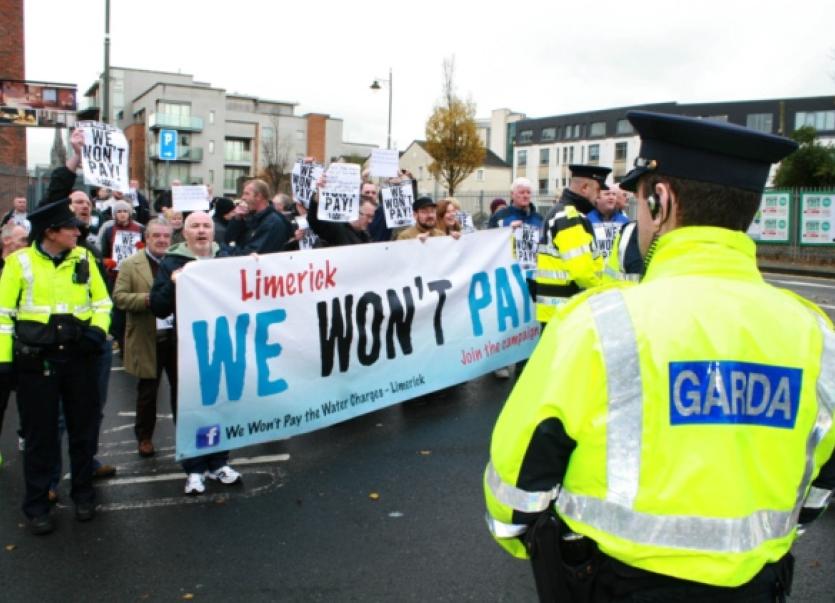 FINANCE Minister Michael Noonan avoided dozens of anti-water charges protesters by entering a hotel for an official function after being driven the wrong way down a one-way street.

FINANCE Minister Michael Noonan avoided dozens of anti-water charges protesters by entering a hotel for an official function after being driven the wrong way down a one-way street.

Around 80 people protested outside the Absolute Hotel in Limerick this morning as Mr Noonan, attended the launch of the Mid West Regional Drugs & Alcohol Forum Awareness Week

Organised by the Anti Austerity Alliance, the protest was the latest to be staged in Limerick as the water charges controversy continues unabated.

Protesters, who began to gather at around 10am, chanted slogans such as “Noonan, Noonan, who do you think you are foolin”, “not a penny for Enda Kenny” and “hail, sleet or snow - Irish Water has to go”. They were greeted by cheers and hoots of horns from motorists as they drove past.

More than a dozen gardai, led by Superintendent Dan Keane, were deployed outside the hotel ahead of Mr Noonan’s scheduled arrival at 10.30am.

Shortly after 11.10am, as the majority of the protesters were gathered at Island Road, a black unmarked garda car arrived at the main entrance of the hotel - on Sir Harry’s Mall- before Mr Noonan alighted from the vehicle and was ushered inside.

As the minister was inside the hotel, the protesters expressed their anger at the his actions by waving banners and chanting on the steps of the hotel. “Come out and justify yourself” shouted one man,

Gardai formed a line across the entrance to the hotel and only those with legitimate business inside were allowed in.

Speaking earlier an event at AIB, O’Connell Street Minister Noonan said people were entitled to protest but that some of the scenes in Dublin at the weekend had gone too far.

“The Government supports legitimate protest, people are entitled to protest, but this went too far and it was particularly disturbing that it was led by an elected member who has the Dáil as a forum if he wants to make a point,” he said.