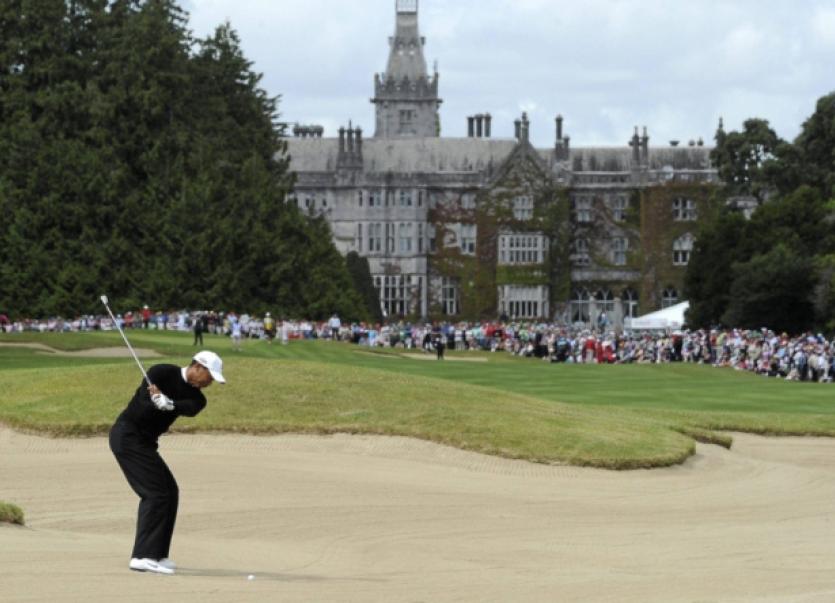 JP McManus has confirmed that the Pro-Am golf tournament which has raised more than €100 million for good causes in the Mid-West is to be staged again at Adare Manor, the resort he has just bought, “in 2016 or 2017”.

JP McManus has confirmed that the Pro-Am golf tournament which has raised more than €100 million for good causes in the Mid-West is to be staged again at Adare Manor, the resort he has just bought, “in 2016 or 2017”.

The news will be greeted with delight by dozens of local good causes, who benefited from donations totalling €43 million when the event was last staged, in 2010.

The JP McManus Pro-Am was held every five years after its first staging in 1990, but in January, the Leader revealed that it would not go ahead in 2015.

At that time, one of the committee members who help to organise the event suggested that tax residency laws which limited Mr McManus’s time in Ireland - his primary business is based in Geneva - were a key factor in the 2015 event not taking place.

“A huge factor is the time JP is here in Ireland – that is the big sticking point,” he said.

“He puts his heart and soul into this event, he is the driving force behind the Pro-Am, and it takes so much organising. The general public don’t realise the amount of work behind the scenes he puts in.”

This week, however, Mr Manus said he had decided to proceed with another tournament, probably in 2017.

“As much as I’d like to have it a year earlier, I think it’s more likely to be in 2017 because with the extra planning time it would be a better event,” he explained.

“I’m hoping to get cracking on it after Christmas. I’ll be dedicating some time every day to it and with the support of the committee and the volunteers who have made it so successful in the past, I’d be very hopeful.

“I will miss not having it next year, but if we can get the support of the players and the celebrities I think we can have another great event.

“If you ask the top players far enough in advance it’s easier for them to say yes and to put it in their schedules. I’d worry it might be a bit early in 2016. So if I get all the right signals from them we’ll look forward to getting the preparations under way.”

As well as raising tens of millions for a myriad of charities and other good causes, the two-day tournament, held in July, has provided a substantial boost to the local economy and put Limerick in the international spotlight.

Tiger Woods, despite his recent troubles, is still the most famous golfer in the world and has been a noted supporter of the event and has taken part on three occasions, in 2000, 2005 and 2010. A friend of the 63-year-old Limerickman, he will once again receive an invitation to take part, as will some of the biggest stars in the game, such as the current world No 1, Northern Ireland’s Rory McIlroy.

Although Mr McManus emerged as the top bidder, with €30 million, when final offers for the Adare Manor Hotel & Golf Resort were opened last week, it is understood that the contracts have not yet been exchanged on the deal.

However, no last-minute hitches are anticipated and ownership of the complex will give the Martinstown Stud owner additional scope in the organisation of the next Pro-Am.