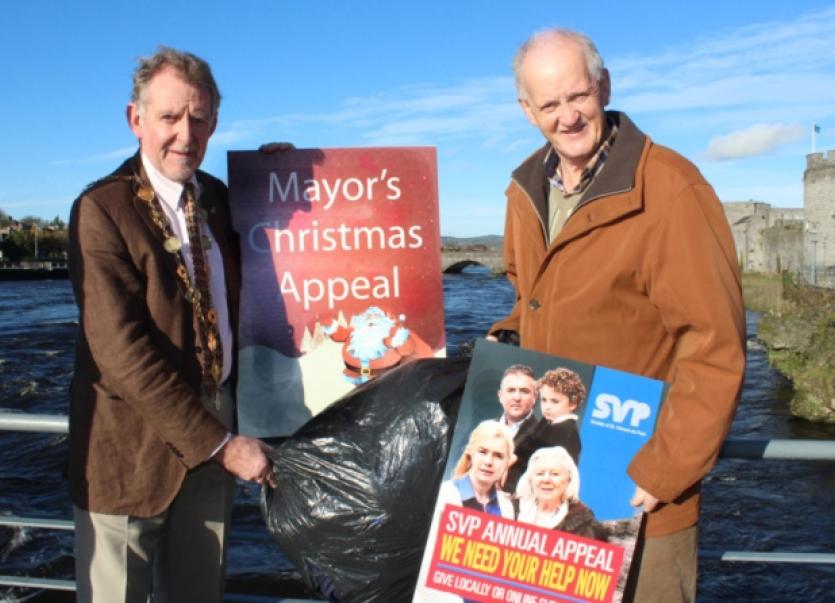 THE mayor’s annual Christmas appeal has taken on a new dimension this year, as the first citizen has sought the support of homeless charity St Vincent De Paul.

THE mayor’s annual Christmas appeal has taken on a new dimension this year, as the first citizen has sought the support of homeless charity St Vincent De Paul.

Mayor Michael Sheahan has joined many of his predecessors in organising a Christmas appeal, whereby local businesses contribute to a fund to help city families who are less well off.

More than 400 people have already applied to the scheme, traditionally known as the Mayor’s Coal Appeal.

Now, in a bid to ensure the money goes to those who need it the most, Mayor Sheahan has teamed up with Michael Murphy, of St Vincent De Paul.

“I am taking this wonderful tradition and broadening it out. I feel while coal was traditional, there are other requirements in life, maybe food and toys that families need,” the mayor said.

Between now and Christmas, Cllr Sheahan will be meeting with St Vincent De Paul on a regular basis to decide where the donations should go, and what they should be spent on.

Only this week, he put out an appeal to city businesses, and the fund is already 60% towards its target.

However, he declined to reveal what that target is.

“Local businesses have been written to, and already a quarter of them have subscribed. I am also writing to new companies which have come to Limerick to see if they want to join the scheme.”

Asked why he feels there has already been such a generous response to the traditional appeal, he said: “It is the nature of all Irish people to want to help their fellow person. We are a great country for looking after our neighbours.”

He said he is conscious of a “new poor” developing in Limerick, one which may be too afraid to seek support from the appeal.

This is another reason he is teaming up with St Vincent De Paul - as their links with communities may help identify these sections of society.

Michael Murphy, regional president of St Vincent De Paul said they will visit many families to determine what support they should get from the appeal.

“We can’t deal with all the people’s needs, but we would hope we can make some difference to their basis necessities,” he said.