Plane pull for charity this Saturday at Shannon 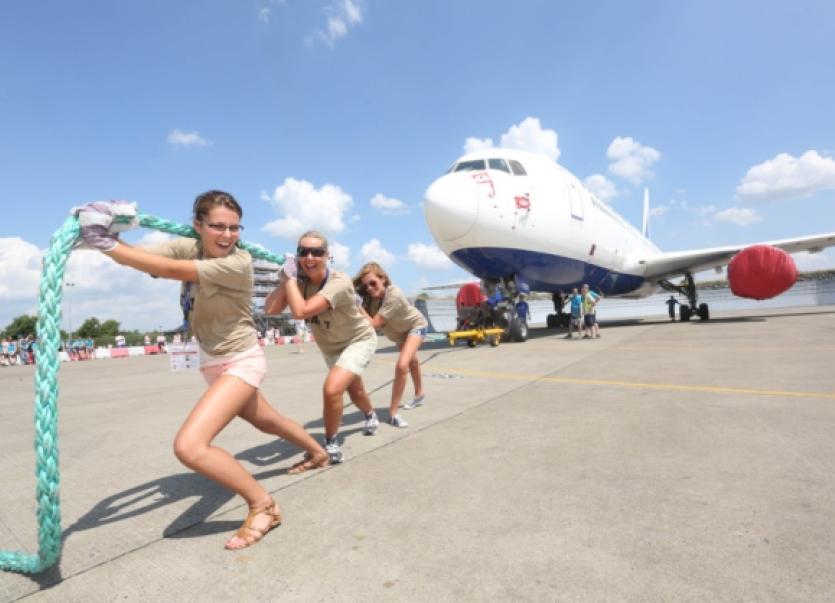 TEAMS of workers from Shannon Airport will be putting their backs into it this Saturday afternoon in a unique charity challenge that will see them pull a plane weighing 85 tonnes across a runway.

TEAMS of workers from Shannon Airport will be putting their backs into it this Saturday afternoon in a unique charity challenge that will see them pull a plane weighing 85 tonnes across a runway.

Some €20,000 has so far been raised for this year’s Orbis plane pull for sight event which sees teams of 25 compete to pull the Boeing 767 - equivalent in weight to 18 African elephants - over 12 feet, in the fastest time.

Supported by GECAS and Shannon Aerospace, the event consists of teams made up of corporate entities, service organisations and groups of individuals who are committed to raising funds for Orbis Ireland.

Thus far the event has raised €75,000, not including this year’s total.

The majority of the funds will go directly towards Orbis’ sight-saving programmes in Southern Ethiopia where high numbers of people are affected by the blinding disease trachoma.

“It is a pleasure to engage with so many of our friends and colleagues, working in Irish-based aviation companies, especially for such a fun and unique event while, at the same time, generating much needed funds for a worthwhile cause such as Orbis.”

Commenting on the Plane Pull for Sight, Maurice Cox, Chairman of Orbis Ireland said: “We are overwhelmed by the support of organisations and individuals across Shannon. It’s fantastic to see such a great turnout in support of Orbis Ireland.

“Thanks to the support of Shannon Aerospace and GECAS for providing the venue and the all-important plane, the majority of the funds raised today will go directly to help the efforts being made in Ethiopia to halt the scourge of avoidable blindness. The areas affected have no primary eye care services and a simple surgical procedure can transform people’s lives.”

Since 1982 Orbis has treated more than 15 million people for blindness related diseases in 92 countries worldwide.

This has been achieved through the teaching of sight-saving skills to thousands of eye care professionals aboard the Orbis Flying Eye Hospital and in local hospitals.

These professionals, in turn, have passed on their expertise to tens of thousands more.