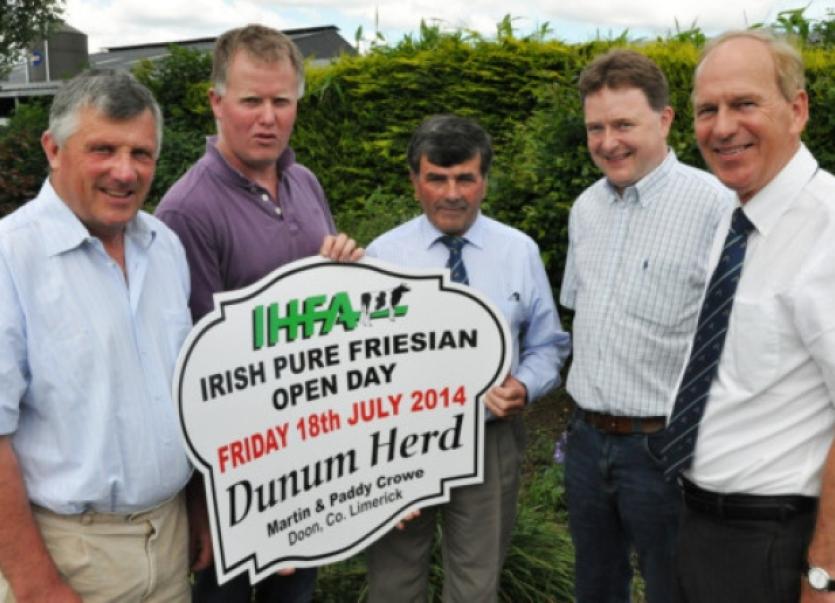 The IRISH Pure Friesian open day 2014 will be held on the farm of Martin and Paddy Crowe and family, Carrigmore, Doon on Friday, July 18 beginning at 1pm.

The IRISH Pure Friesian open day 2014 will be held on the farm of Martin and Paddy Crowe and family, Carrigmore, Doon on Friday, July 18 beginning at 1pm.

This is a fitting tribute to the herd which celebrates 60 years of pedigree Friesian breeding.

Martin is the third generation to farm the land following in the footsteps of his father Paddy and grandfather Timothy H. The family began farming in Carrigmore, Doon in the 1800s milking Shorthorns.

Type classification through IHFA services was adopted in 2005. Currently there are 11 cows classified EX and a further 38 classified VG.

Almost all of the milking platform has been reseeded in recent years. All of the latest Moorepark grazing technologies are utilised, commencing with the spring rotation planner, followed by the weekly grass wedges and culminating with the autumn rotation planner. Grassland measurement and budgeting is enhanced by the adoption of latest software technology.

He called the herd Dunum because he maintained it was the Latin name for Doon, the local village. Around that time AI was being introduced and he used the best bulls standing in local AI.

Paddy Crowe, Timothy’s son, then took over the running of the herd and continued to breed Friesians. As a result of the widespread switch to Holsteins in the late 80s and early 90s, he had great difficulty in sourcing quality British Friesian AI bulls, but he has Dovea AI and the late Dermot Cahill to thank for the supply of proven bulls during this time.

During his time at the helm, Paddy built up a large network of customers from Louth to Kerry and everywhere in between, who bought replacement heifers and breeding bulls.

In fact many of these loyal customers still return to the Dunum herd for breeding stock today. He also was a founding member of the Limerick and Clare Friesian Breeders club serving as chairman in the 1980s.

Recently he was honoured with the coveted Hall of Fame Award for his lifetime achievements as a Friesian breeder. Although still maintaining a daily interest in everything to do with the herd, in 1998 Paddy passed on the baton to his son, Martin, who holds a degree in agriculture. He has continued to develop the herd successfully.

Thus the third generation of Crowes became involved with Martin. He continued the breeding policy adopted by his father as he was impressed by the excellent fertility of the Pure Friesian whilst at the same time maintaining high production yields, with a herd average of 1,500 gallons at the time. The success of the Friesian breeding policy is evidenced by the continued strong demand for Dunum breeding stock.

The herd has sold a number of bulls to AI over the last 10 years.

The first being Dunum Capan 12 EX sold in 2003 in the 50th anniversary sale for 3,500gns. Dunum Image 51 VG was subsequently purchased for AI, being a Grove Image son out of Dunum Arkadina 6 EX90.

Two Dunum bulls were purchased for the Gene Ireland testing programme; Dunum Grone 6 (DUZ) and Dunum Capan 23 (DUP), who went on to have a daughter proof with an EBI of €232. Unfortunately he was taken with the IBR outbreak at Enfield. More recently Dunum Brandew (WZB) was purchased for AI, he currently has a genomic EBI of €241.

The open day will consist of stock judging, reason giving and an opportunity to walk through the herd with an introduction to the prominent cow families. All welcome.