Hen harrier will decline unless additional aid is forthcoming - Cathaoirleach 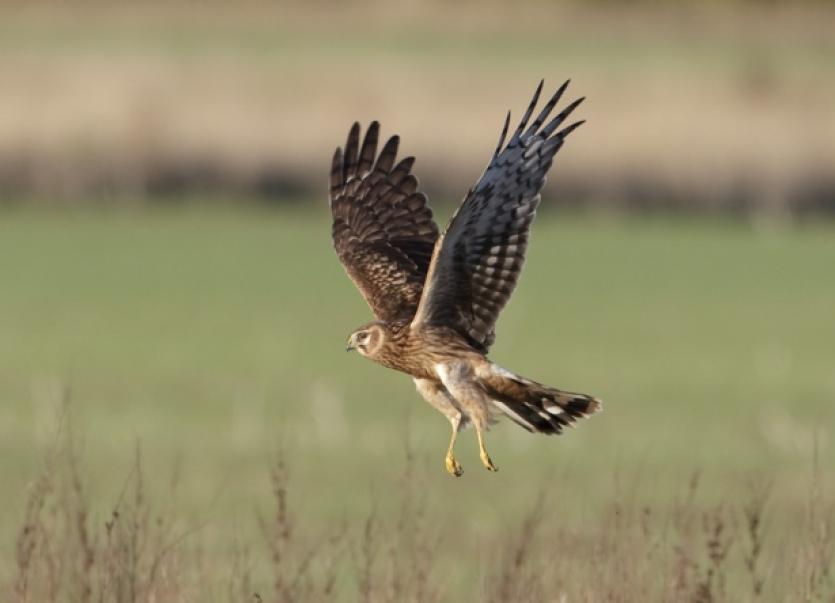 CATHAOIRLEACH John Sheahan, who ruffled feathers of conservation groups with his “open season” comment on the hen harrier earlier this year, says the species will experience a further decline if there isn’t additional aid.

CATHAOIRLEACH John Sheahan, who ruffled feathers of conservation groups with his “open season” comment on the hen harrier earlier this year, says the species will experience a further decline if there isn’t additional aid.

He called on the Government to review how State and European grant aid for farmers is distributed in light of what he described as “unprecedented challenges faced by the West of Ireland farming community”.

The West Limerick farmer said that farmers who owned land classified as Special Protection Areas (SPA) are at a disadvantage as the funding allocated through schemes such as CAP Pillar 2 and AEOS are “insufficient” to cover both the loss of revenue from not being able to farm the land or the cost of preserving and protecting the SPA.

“At present, farmers who receive grant aid under Pillar 2 of CAP qualify for such funding as they farm disadvantaged or marginal lands.

“However, the level of grant aid received remains the same irrespective if you own SPA designated land.

“Therefore, farmers including many in West Limerick are at a distinct disadvantage,” explained Cllr Sheahan, who farms in Glin.

He says it is imperative that the Minister for Agriculture, Simon Coveney and Minister for Arts, Heritage and the Gaeltacht, Jimmy Deenihan review the situation which is having a “negative effect on rural communities and the SPAs that require upkeep from farmers”.

“The bottom line is that the funding mechanisms currently in place are crippling the ability of farmers who own SPA land to maintain a livelihood while it is also deterring young people from entering the sector,” said Cllr Sheahan.

The SPAs in and around the Mullaghareirk Mountains region of West Limerick have been designated as such, particularly, for the benefit of the hen harrier.

“The well-being of the hen harrier, which is a threatened and vulnerable species, is largely dependent on the work carried out by farmers in maintaining the land for the benefit of the local ecosystem.

“While farmers, me included, do the best that they can with limited resources there is a very real threat that the hen harrier species will experience a further decline if additional aid is not forthcoming. We can only do so much.

“This is something I have raised with farming, wildlife and environmental groups who share the view that proper maintenance of SPAs is critical.

“While other farmers who own disadvantaged land receive the same level of grant aid as us under Pillar 2 of the CAP and are also allowed to plough, drain and reseed marginal lands for the purpose of developing their business, we are left in a position where funds received under CAP Pillar 2 are invested in maintaining SPAs.

“The farming sector in areas such as West Limerick is undeniably in decline and this is having a negative impact on the wider community. As a result, I will be writing to ministers Coveney and Deenihan requesting them to urgently review the funding situation in respect of SPA management,” concluded the Cathaoirleach of Limerick County Council.

Last August, Dr Allan Mee, chairman of the Irish Raptor Study Group, wrote to the Limerick Leader to say they were especially shocked and saddened to read the views expressed by the new cathaoirleach in a piece in Farm Leader in July.

“Cllr Sheahan’s call for an ‘open season’ on hen harriers is highly irresponsible and can be interpreted as incitement to break both Irish and EU law,” said Dr Mee.

The article about the hen harrier and forestry prompted hundreds of comments from as far away as California, Brazil and South Africa.

The piece was sent by somebody to the Raptor Persecution Scotland blog who transcribed it on their website, and even set up a petition for Cllr Sheahan’s resignation.

The story was also picked up by the Sunday Times

In response, Cllr Sheahan wrote that in the Farm Leader article he made reference to “open season” on the hen harrier if certain changes were not made.

“This remark infers that I advocate that this bird of prey be hunted similar to wild game that is hunted at certain times of the year.

“This inference was entirely unintended and I apologise for any upset my comment may have caused.

“I wish to clarify that my comment was meant in the context of my political battle with the Irish Government to seek a proper plan whereby the landowners and particularly, the farmers are not out of pocket by a designation that hamstrings them from earning their livelihood.

This, unfortunately, is the case at present,” said Cllr Sheahan in August.

Now he has spoken in further detail about the current situation facing many farmers working on SPA land.