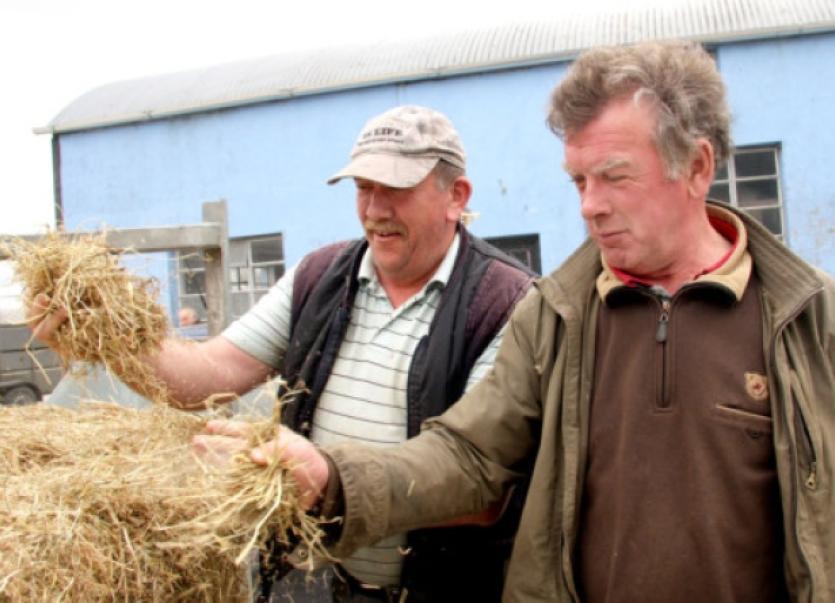 THERE HAS been nothing boring about watching the grass grow for farmers.

THERE HAS been nothing boring about watching the grass grow for farmers.

While grass growth has picked up the ongoing effects of the fodder crisis means it will take more than a growth spurt to solve the problem.

Limerick IFA chairman, Aidan Gleeson, agrees that it is those in parts of East and West Limerick that are worst hit.

“Everyone is affected to different degrees. There is no farmer that isn’t affected by it. But we are doing our best to alleviate the situation to some little degree but like I said previously, the only solution to this is better weather.

All we can do in the meantime is do what we can to try to get to a situation where there is enough grass,” said Mr Gleeson.

Through contacts Limerick IFA sourced 91 square bales of hay from England in two loads. They were distributed from GVM’s mart in Abbeyfeale.

“We don’t want to say that 91 bales are going to be the answer to all their problems. It probably got some over the weekend but the problem still persists. They are still in need back there,” said Mr Gleeson.

As over 70 farmers from the greater Abbeyfeale area queued up for the hay, the local chairman was struck by their strength through adversity.

“We got great co-operation - from the guy who was loading it to the mart to the farmers themselves.

“There was a lot of them there queuing up for the bales, they were there for a considerable amount of time.

“There was great positivity there, but guys were putting a brave face on it. They were happy to get what they were getting but there was still the underlying current that one or two bales of hay is not going to solve it. It meant the world to them to get it but it’s not the end of their problems,” said Mr Gleeson.

In distributing the cost-price bales he said they tried to be as fair as they could to everyone and no-one went home without something.

Needless to say there wasn’t as much as a wisp of hay left.

“We are going to continue to work on it and hopefully we’ll be able to source more hay from England and we’re also looking forward to a boat load of hay from France,” said Mr Gleeson.

Local farmers in trouble are urged to speak to their local IFA rep for more information about upcoming loads or contact the Limerick office on 061 314196.

While the Department of Agriculture’s helpline is 1850 211990 and Minister Coveney said: ”No animal should die of starvation in this country and help is available to those farmers who cannot cope”.