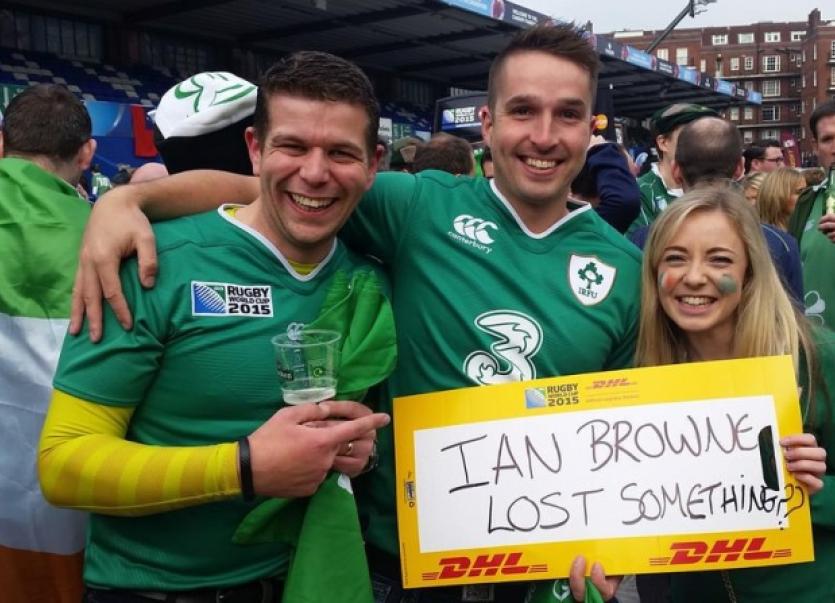 A COUPLE from Limerick did their fellow Irish rugby supporters a good turn at the weekend, when they found and returned tickets to the big Ireland-France game to their rightful owner.

A COUPLE from Limerick did their fellow Irish rugby supporters a good turn at the weekend, when they found and returned tickets to the big Ireland-France game to their rightful owner.

John Cullinan, 27 from Castletroy and Rachel Kelly, 24 from Castleconnell, were heading to the Cardiff Blues fan zone on Sunday before the match when they came across three tickets on the ground.

Though names were on the tickets, the couple found it difficult to find the rightful owner, shouting for an Ian Browne amongst a flood of rugby fans.

“We were going over just to get a few pints and we found three tickets on the ground, and all for the West Stand,” said John.

But after liaising with security, the two decided to fetch a DHL sign, on which they could write their personalised message addressed to the owner: “Ian Browne, lost something??”

Thanks to their initiative, the three worried Ireland supporters found the couple and were reunited with their West Stand tickets.

“A few people spotted us and came over to us, and the rest is history. They were absolutely delighted. And they had got in touch with the same security that we had been talking to, and were able to get their tickets back from them,” John said.

As a reward, the three ticket owners treated the couple to a few pre-match pints, he said.

“It would have been rude not to. We had a few Heinekens before the game, and then we headed into the game ourselves,” he told the Leader on his way home.

And since delivering his kind gesture, John has been contacted by DHL, who are trying to arrange quarter-final tickets for him.

The photo of the three was first put on Twitter and went viral within a matter of hours.