Belt and beard aside Andy Lee hasn’t changed a bit 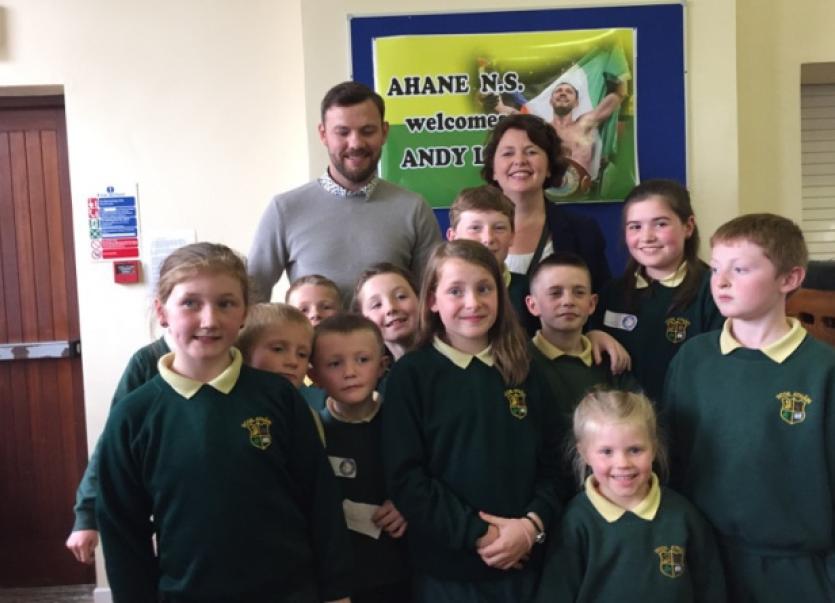 A TALENTED young boxer by the name of Andy Lee visited Ahane National School in 2007 for their science day exhibits.

A TALENTED young boxer by the name of Andy Lee visited Ahane National School in 2007 for their science day exhibits.

Eight years later he came back and all that has changed about him is the beard on his face and the WBO World Middleweight Champion title belt around his waist.

Liz Kiely, principal, said when Andy came to see them first he wasn’t very well known but he gave the children a lot of his time.

“He looked at their different science experiments and he showed great kindness. We always remembered his kindness and he still has that same kindness. He hasn’t changed a bit,” said Liz.

The boys and girls who were in junior infants during Andy’s first visit are now in sixth class. So the staff and pupils in the school thought it would be a nice idea to ask him back. By chance they learned a niece of Andy’s is in the school. The invite went out and Andy answered it last week.

“There was great excitement when he confirmed he was coming last Wednesday. The children made banners and posters and we decorated the hall. The lads in O’Connor’s on William street did a fantastic banner for us. I went in the evening before and when I mentioned Andy Lee’s name their eyes lit up and they had it done in 15 minutes,” said Liz.

Andy arrived on his own with the belt which he gladly shared around. Every class contributed to the day and poems and songs were sung in his honour in the hall. Parents were also in attendance.

A special moment was a photo taken with sixth class pupil Shay Doyle by his mum. Eight years ago Andy posed for a picture with Shay, whose dad is a big boxing fan. Photos to treasure.

The leadership club - made up of fifth and sixth class pupils - had a big role to play in organising the day and there were lots of interesting question for Andy.

They discovered that he likes to watch The Simpsons to relax; he enjoyed the Rocky films; his favourite venues to box were in Madison Square Garden in New York and the UL Arena; his role models were his brothers and Muhammad Ali and he plans on boxing for three more years.

“He is very interpersonal. He asked each child their name and answered their questions using their name. He was very generous with his time,” said Liz.

Andy even tweeted “Fun day at Ahane NS” and posted a vine of the children cheering and clapping.

Every child will have a memento of the day as Andy’s autograph is being printed off for every one. As will Andy because Kate Phelan presented him with a picture frame on behalf of the leadership club.

“The magic of having a world champion in our school hall will be a memory for the school and leadership club forever. The cheers of the children for our world champion are still ringing in our ears. It is a proud memory for us all - Andy is an inspirational role model,” said Liz.