O’Malley recalls life in the shadow of the gunman 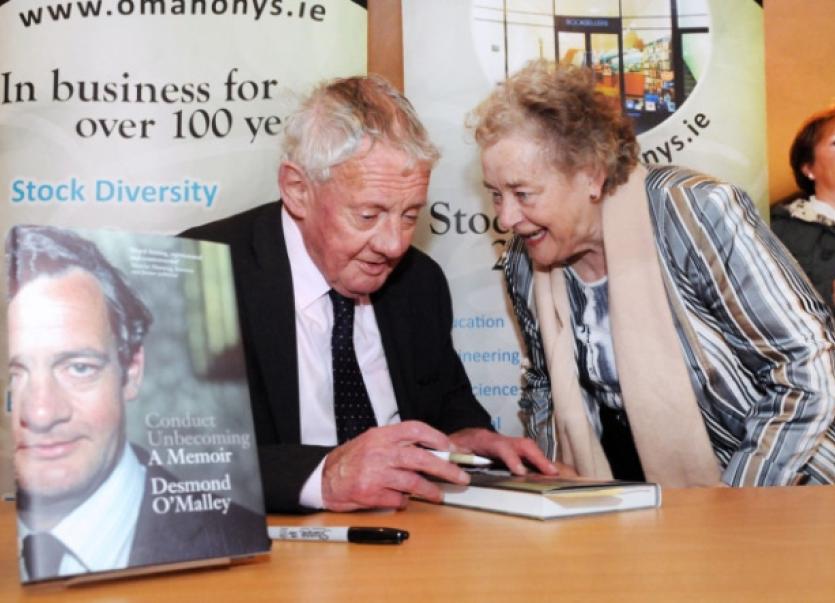 DES O’Malley says his children were “fortunately too young” to have a clear memory of the occasion on which a coffin was landed into the front garden of the family home in Corbally.

DES O’Malley says his children were “fortunately too young” to have a clear memory of the occasion on which a coffin was landed into the front garden of the family home in Corbally.

As Minister for Justice in the early 1970s, he led the fight against subversives at a time of great uncertainty. Regarded as an authoritarian by republicans, this was the minister who introduced the non-jury Special Criminal Court, banned Sinn Fein from the airwaves and who had even identified possible camps should the introduction of internment prove necessary.

It wasn’t, but the gardai did find it necessary for Des O’Malley to carry a gun at all times. And in his newly published memoir, Conduct Unbecoming, he describes the occasion when staying with a friend in Ballsbridge – at a time when he was advised to never stay longer than a week in any one place – and officers ordering him to get on the floor. A rifle with a telescopic sight had been found in a flat across the road that had been rented a few weeks earlier by someone with a northern accent.

He was in Dublin when the coffin was thrown into his front garden in Limerick. But his wife Pat and their young children were at home.

“They used to throw in red paint as well. That was supposed to represent blood, you see,” says Mr O’Malley after a marathon two-hour book signing in which all 250 copies at O’Mahony’s on O’Connell Street were snapped up.

Pat, to whom he dedicates the last word in his memoir for putting up with the stresses and absences, seems to have taken the intimidation in her stride.

“Do you know I met two men here today to get books signed? They were both retired gardai who used to spend part of 1970 in our garage. They said she used to make tea and coffee for them when they were in there in the garage beside the house. At one time we had six men in there. The children were too young to recall it really. The gardai, if they knew there was a march coming out to the house, would advise Pat to take the kids out in advance and she would take them away for a few hours.”

Even after Des O’Malley left ministerial office in 1973, he still needed security. And among the gardai assigned to him was his late friend Jerry McCabe, murdered by the IRA in Adare in 1996.

“When I would come from Dublin, himself and Ben O’Sullivan [seriously injured in the same attack] would take over my security at that stage. I used to go around with them and even after I was minister, they were kept on. We used to go around in a blue Vauxhall car, a strange thing you don’t see now at all. It was very uncomfortable, a big comedown from the Mercedes. I used to say ‘Why are you in this kind of car Jerry?’ ‘It has a great engine,’ he would say. ‘It will do 150 miles an hour if we ever need it to’. They were both trained to drive fast and they would alternate. One would drive, I would be in the front seat and the other would be in the back seat with a submachine gun. That’s the way we used to go around.”

Conduct Unbecoming recalls the men’s last meeting, at a meeting of Irish and British parliamentarians in Adare in March 1996.

They joked that nothing ever happened in Adare and the late detective had told Mr O’Malley it was “the boys down the road in Patrickswell we have to watch”.

“And of course among those who killed him was one of these people from Patrickswell,” he says.

Much of Conduct Unbecoming focuses on Mr O’Malley’s political tussles with Charles Haughey before and after he was drummed out of Fianna Fail.

And while he is magnanimous enough to recognise Haughey’s organisational, intellectual and political talents, the overall assessment of Haughey is of somebody who had a profoundly corrosive and corrupting influence on Irish public life, traces of which are still around today. “To some extent you could say things have improved and that the problems today, the type of cronyism we are seeing, is not as financially blatant as it was. There isn’t the same degree of favouritism of a major kind like there was in that time in the 1980s.

“Appointing people to boards and that is nice for their ego but it isn’t a huge deal. But it is still apart of that mentality that grew up in this country, unfortunately, fostered in the past and it won’t disappear overnight,” says Mr O’Malley.

Conduct Unbecoming is published by Gill and Macmillan and is now on sale at €24.99