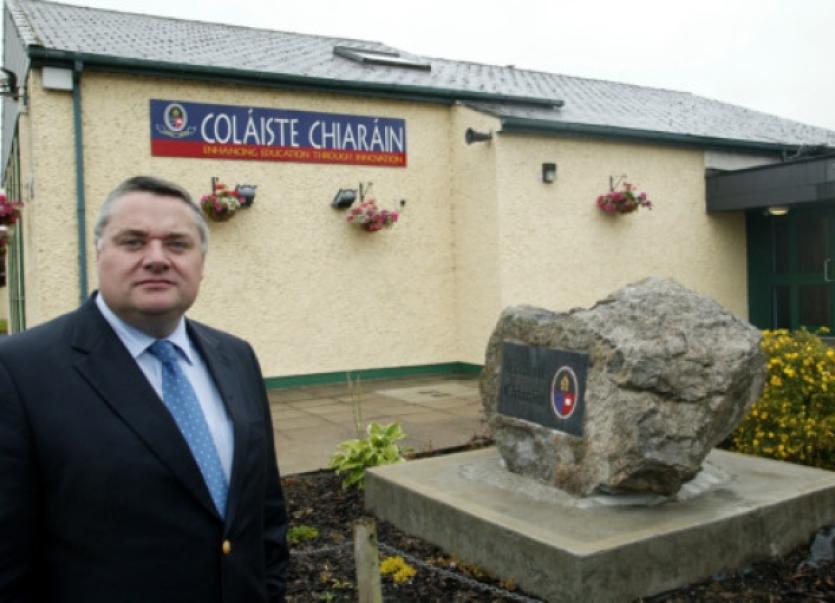 PARENTS sending children to school at Colaiste Chiarain in Croom can expect significant reductions in transport bills from September with confirmation from the Department of Education that travel needs will in future be assessed in line with all other schools within the Limerick common application scheme area.

PARENTS sending children to school at Colaiste Chiarain in Croom can expect significant reductions in transport bills from September with confirmation from the Department of Education that travel needs will in future be assessed in line with all other schools within the Limerick common application scheme area.

Significant numbers of the 900 students in the County Limerick school travel daily from Limerick city and suburbs and Croom - as well as Salesian College Pallaskenry - is included in the common application system for secondary schools that has applied in Greater Limerick for some years now.

Until now, families had incurred annual bills of up to €900 to send their children to Croom but from next September it will cost no more than €350 for a single child and no family will be asked to pay more than €650. Children who are medical card holders are exempt.

The rule change follows what a “delighted” Colaiste Chiarain principal Noel Malone said was a “long campaign” to put students in Croom on an equal footing to those elsewhere.

“This is a very significant achievement for our school and it will make a huge difference financially to our parents and also finally bring about equality of access for all, which is justly deserved,” he stated.

“I would like to thank especially our parent body, staff, board of management and of course the CEO of Limerick and Clare Education and Training Board, Sean Burke for the trojan work which was necessary in support of this campaign. These are difficult times and I am grateful that the Department of Education and Skills has done the right thing by our school, finally recognising the current inequitable situation.”

The reduced charges come into effect for the academic year 2014-2015 and can be paid by the end of July or in two instalments up to the beginning of December.

Separately, Mr Malone revealed that some of his city-based staff have been reducing their own transport bills by cycling from Limerick to Croom.

But he wasn’t aware of a single teenager - even among those living in the County Limerick village - who made the trip by bike.

“I noticed that in many of the new schools they don’t even have bike sheds any more,” said Mr Malone.

“I don’t think there is one student here cycling to school - zero.”

“There are just short of 900 students here and we have never been asked by a student about somewhere to chain a bike. The only people who actually cycle here are the staff,” Mr Malone added.

“Kids just don’t really cycle to school any more - they don’t even walk because what happens is parents are dropping them. They don’t walk even if they are only living up the road - it is just amazing to see the change.”

Rachel Malone, a fourth year student who lives in Rhebogue, travels by bus.

She said that even if she was living close to the school, she more than likely wouldn’t make the trip on a bike - “certainly not wearing a skirt and with a heavy bag”.