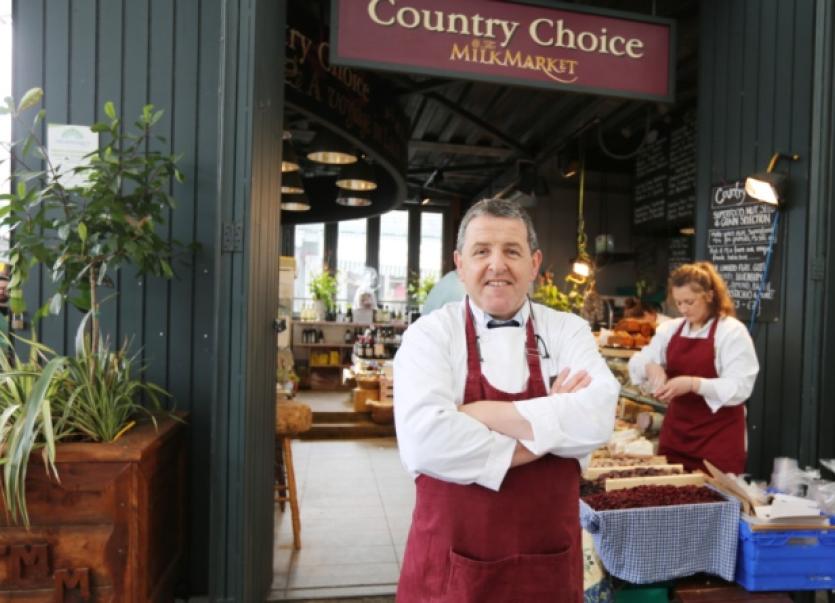 THE PROPRIETOR of the hugely popular Country Choice stall in Limerick’s Milk Market has spoken of his delight at winning best market stall in the country.

THE PROPRIETOR of the hugely popular Country Choice stall in Limerick’s Milk Market has spoken of his delight at winning best market stall in the country.

Peter Ward, who also runs a shop under the same name in Nenagh, said he was like a child at Christmas waking up on Saturday morning last to find out if they had won the award under the best shops competition by The Irish Times.

“I’m so delighted, absolutely thrilled,” he beamed from behind the counter, as a representative of the paper handed him a bottle of champagne by way of congratulations.

“I’m working 33 years, every day behind the counter and this would be one of the highlights. When we opened our shop years ago we read Theodore Fitzgibbon’s recipes in the back page of the Irish Times. Yes, I did wake up this morning as if it was Christmas morning, and did get up at 4.30am to log on to check.

“This place is bustling with atmosphere. We’ve a great relationship with all our customers, many of whom would have come to our shop in Nenagh before we opened up in Limerick,” he said.

However, there was not much time to pause and celebrate on Saturday last, as thousands of people again flooded through the market for more than six hours.

He said they are looking forward to celebrating after Electric Picnic and Waterford Harvest Festival.

“For people who feed the world every day it’s lovely to put your feed under somebody else’s tables,” he said.

Country Choice opened its doors in Nenagh in 1982, and in 2010 Peter and Mary Ward jumped at the chance to set up a stall at the newly redeveloped Milk Market.

Their daughter Evie runs nearby Nutshed, selling tasty vegan and paleo food. It’s open in the Milk Market each Friday, Saturday and Sunday.