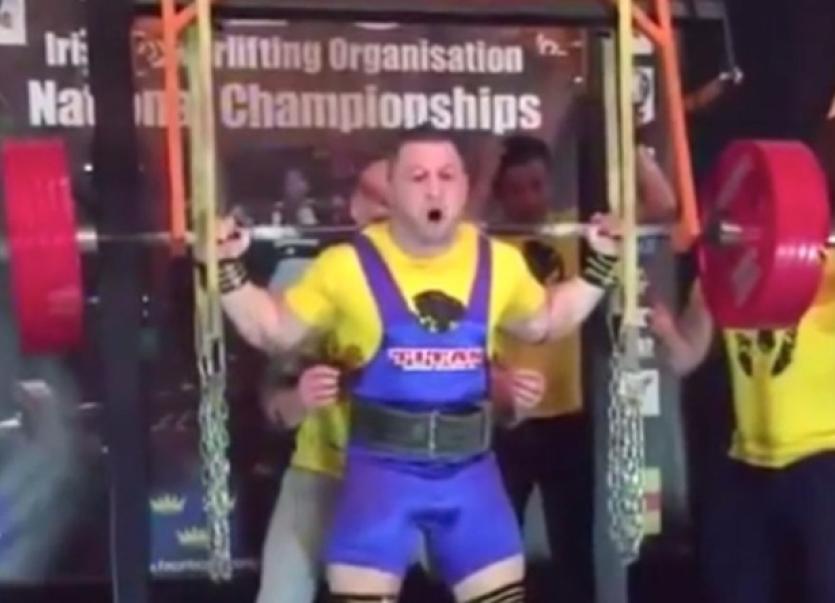 A POWERLIFTER who dramatically snapped his quadriceps during a championship in Limerick is recovering after surgery at the University Hospital.

A POWERLIFTER who dramatically snapped his quadriceps during a championship in Limerick is recovering after surgery at the University Hospital.

A video of the weight lift which went wrong - drawing shrieks of horror from onlookers - is becoming a viral sensation on YouTube.

The short 20-second clip, which shows his agonising collapse, has amassed close to 150,000 views in recent days.

Tommy Dolan was attempting to squat 280kg - or a staggering 617lbs, 44.1 stone - at the Irish Powerlifting Organisation’s National Championships held in Limerick recently. It was his opening lift out of three lifts.

His previous heaviest lift was 290kg, 10kg more than what he lifted when he suffered his injuries. He weighs some 89kg and was lifting more than three times his body weight.

Shane Brodie, IPO president, said on Facebook that he had visited Tommy in hospital in Limerick after the horrific incident, and said that though he is in a lot of pain “he’s in good spirits” and is “overcome by all the messages and posts of support”. Writing on Facebook, Tommy said he really appreciates the support he’s receiving.

“It can only benefit my recovery. I hope to be back benching in comps (competitions) in the future. I’d like to thank Shane Brodie for his professionalism and for running some of the best competitions in the country,” he wrote.

It’s understood that Tommy may require a long period of rehabilitation before making a comeback.

Those within the room were asked not to post videos online, but at least one video of the incident has appeared on YouTube.