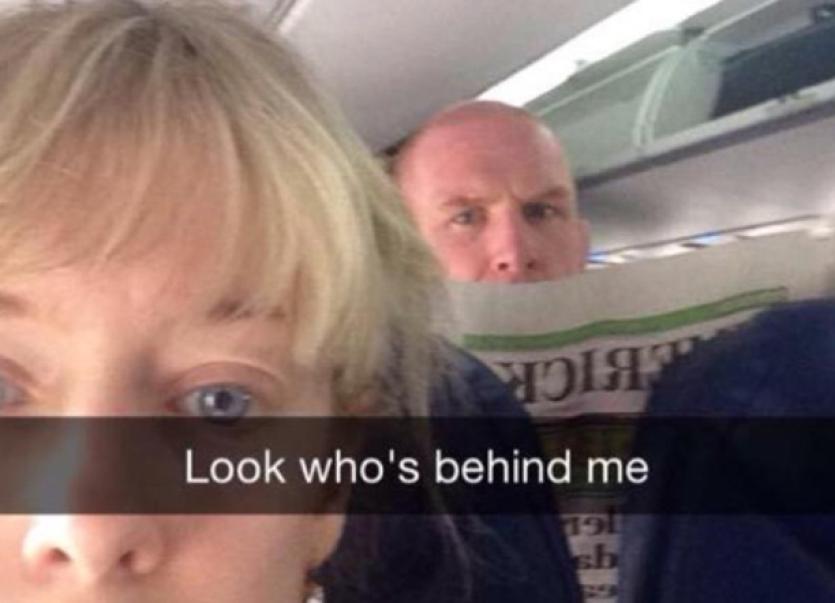 THE woman who took a chance ‘selfie’ with Paul O’Connell on a plane has joked that she was “frozen with fear, stuck to my seat” when she saw the Irish rugby legend’s intense reaction.

THE woman who took a chance ‘selfie’ with Paul O’Connell on a plane has joked that she was “frozen with fear, stuck to my seat” when she saw the Irish rugby legend’s intense reaction.

Katie Brosnan, an optician from Kanturk, took the picture - which has gone viral since her friend, Today FM DJ Louise Duffy tweeted it - on a flight from Cork to Edinburgh last Friday.

“I was flying from Cork to Edinburgh with my friends for the weekend,” said Katie this Monday. “I was sitting up in row one and I was delighted to see I was sitting up beside half the Munster team, while my two friends were down the back, they didn’t get good seats like me. I thought I might get a sneaky selfie of Paul, but it backfired - I had no idea!”

“I can’t believe, it was just a perfectly timed photograph really - it is gas, I can’t believe the coverage it is getting,” she added.

Ms Brosnan posted the picture on Snapchat, while Duffy posted it on Twitter, saying: “Hey @KatieABrosnan - do you think he noticed?”

The original tweet has had 200 plus retweets and 342 favourites as of this Monday lunchtime.

Paul was clearly unimpressed at Katie’s ‘selfie’ attempt, but she hopes the Limerick man can now see the funny side.

“I was too afraid to talk to him after seeing the expression in the photo - I was frozen with fear, stuck to my seat. It backfired on me anyway,” she laughed.

“I am delighted all the coverage it is getting - I haven’t heard from Paul, but I presume he is not annoyed or anything.

“I wouldn’t know a whole lot about rugby actually,” she admitted.

“I am an optician, I have my own business in Kanturk - I was thinking Paul probably has perfect eyesight to be able to spot that! Paul is welcome to a free eyetest in my practice here any time if he wants - but he doesn’t need it.”

And, true to his Limerick roots, Paul was reading a copy of the city edition of the Limerick Leader newspaper in the picture. Writing for the recent supplment marking the paper’s 125th anniversary, Paul wrote of the Leader: “I remember when I was at Ardscoil Ris and I was picked for Ireland Schools, I got put on the front page of the Leader.

“Before I got offered a contract for Munster, when I was playing for Young Munster, none of the games were on TV but I got good write-ups in the Leader. I scored a hat-trick one day against De La Salle and I remember I was hoping that it would be featured in the Leader so that Niall O’Donovan, the Munster forwards coach, would find out that it had actually happened.

“Today, I enjoy reading it for local news - particularly positive local news. I also follow the Leader on Twitter and I think it’s a very good service.”