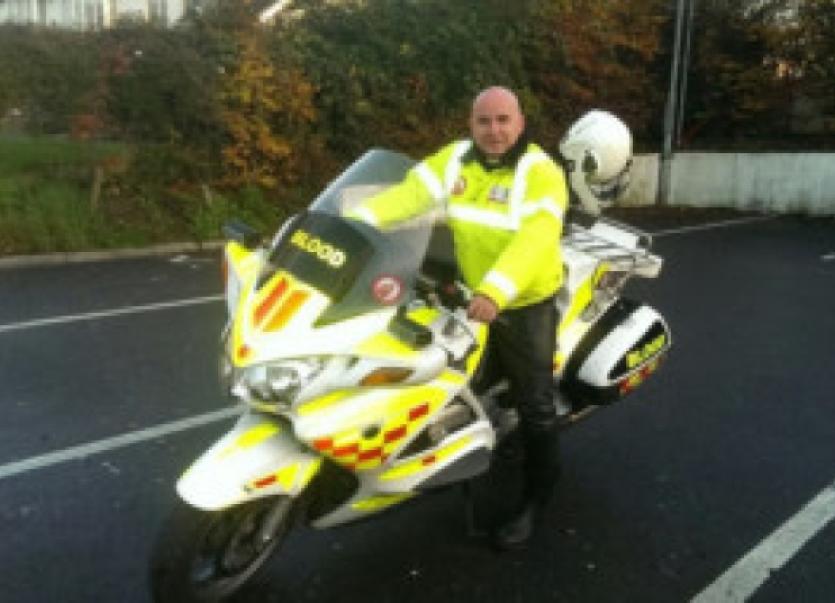 MINISTER for Finance Michael Noonan will today officially launch the services of a motorbike group which delivers blood and breast milk to patients around the country.

MINISTER for Finance Michael Noonan will today officially launch the services of a motorbike group which delivers blood and breast milk to patients around the country.

Blood Bike Mid-West is a voluntary organisation providing free out of hours emergency transport, primarily by motorbike, of blood products, breast milk and medical records to the HSE, private hospitals, clinics and hospices.

A registered charity run by professional or semi-professional motorbike riders, it is based in Limerick and serves the wider region, including Clare and Tipperary. It was set up in response to the identified need for an out hours service providing the transport of essential items to relieve emergency situations.

John Sheedy, one of the directors of Blood Bike Mid-West, explained his reasons for getting involved was after his son Noel died aged seven.

“Our local doctor and the doctors and nurses at the hospital were outstanding and they did their absolute best for Noel. There was a special drug he needed but it was held in Dublin and the hospital had to get it down to Limerick. They did it as fast as they could, but it was too late for Noel. Some years later, I saw how well Blood Bike UK was working and I thought if we could do that here, wouldn’t it be fantastic? I felt if we could save even one other family from the pain that we are still going through, it would be worthwhile,” he said,

It operates Monday to Thursday from 7pm-7am and from 7pm on Friday to 7am on Monday.

Blood Bike Mid-West relies entirely on fundraising, voluntary contributions and donations to meet the basic operational costs of providing this service. All drivers are required to complete the RoSPA (Royal Society for the Prevention of Accidents) training programme and to achieve the RoSPA Advanced Riding Certificate, silver or gold standard.