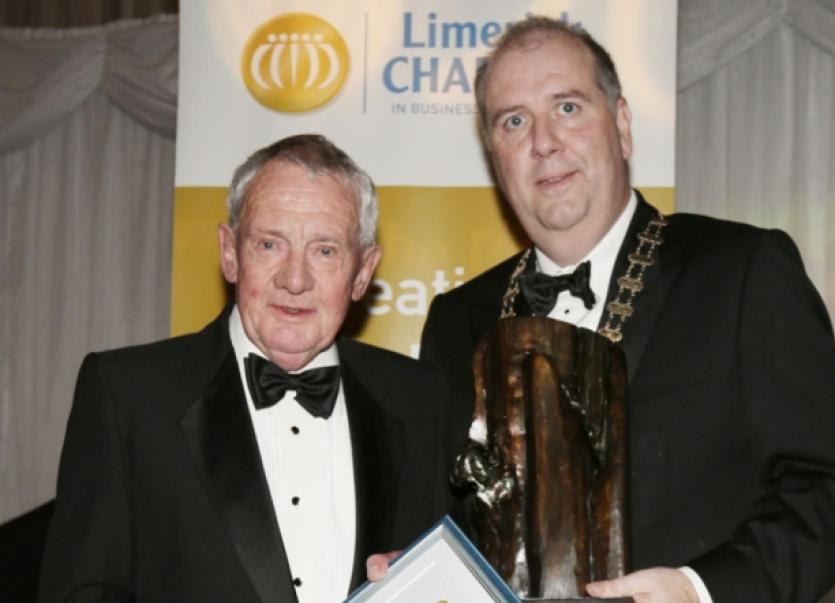 Limerick Chamber president Cathal Treacy described Mr O’Malley as “a man who has been one of the most influential figures in Irish public life over the past three decades.”

After receiving his prize at the climax of the Limerick Regional Business Awards, Mr O’Malley said: “It is all a bit overwhelming.”

The annual Chamber dinner started in 1944 when former Taoiseach Sean Lemass was the guest speaker.

Mr O’Malley said he would have hoped his late father, Desmond Sr would have been in attendance, as he was the Mayor of Limerick at the time.

“He was elected in 1942 and again in 1943, and he would have ended his second term at the end of June 1944. I’d like to think that 70 years after Lemass was here, that perhaps my father was here too, and I am here tonight. I am very honoured and grateful for the award you have given me,” he told the audience.

Mr O’Malley referred to one of his predecessors, Kieran McGowan, and a trip he made to Austin, Texas in the 1980s.

“I was doing a tour of the United States. We were in Chicago, and we took off in a plane to go to Austin, Texas. To be honest with you, I had never heard of Austin, Texas before. I was given a brief to read. I started reading it beside Kieran McGowan of the IDA, and got to about page three, and said ‘Good God Kieran, why are you bringing me down to meet a 24 year old? He is not going to do much for Ireland!”

Of course that 24-year-old was Michael Dell, who set up Dell’s first European headquarters in Raheen, employing 5,000 people at its height.

Mr O’Malley was presented with a unique sculpture crafted from bog oak by Joe O’Shea of ‘Banner Bog Oak’.

Meanwhile, nine other city companies were honoured at the Chamber business awards.

They went to YellowSchedule, based in UL, Kemp Technologies, Plassey, Dell in Raheen, Michael Gleeson’s Shoes, William Street, the Limerick Strand Hotel, the Lime Tree Theatre, and Home Instead Senior Care based in the Dock Road.

It was another Dock Road company which won the overall title of Limerick’s business of the year.

Grassland Agro, which produces and sells a range of commodity fertilisers and soil conditioning products, took the overall title.

Liam Woulfe, who founded the company in 2002, said: “It is a fantastic honour to win it, and I really appreciate it. It is a great accolade to achieve on behalf of my staff who are so good and so attentive, and on behalf of my family who have put up with a lot.”