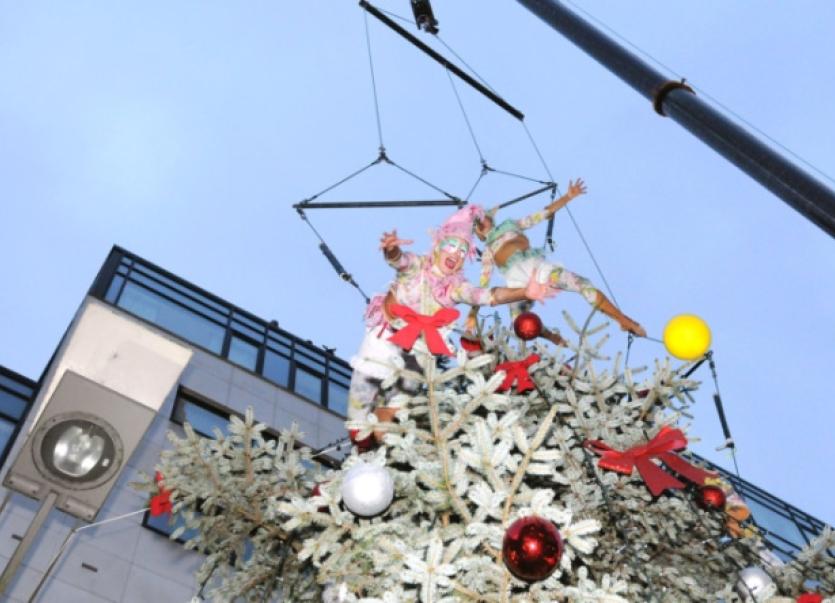 CITY retailers have enjoyed a boost in trade off the back of a record turnout of people to see the Christmas lights turned on in Limerick.

CITY retailers have enjoyed a boost in trade off the back of a record turnout of people to see the Christmas lights turned on in Limerick.

And there are high hopes this will last throughout the festive season.

More than 12,000 packed into Bedford Row and Lower Thomas Street despite cold weather on Sunday last to witness the spectacular start to Limerick’s festive celebrations.

According to organisers, people came here from as far away as Dublin, and up the west coast.

A group of elves have set up shop in the city, and are to occupy a number of vacant units in the city over Christmas, giving a further boost to traders.

Helen O’Donnell of the Limerick City Business Association said: “It was a really good weekend - and there is a lot more to come!”

She said unlike in previous years, traders are praising the atmosphere in the centre.

“There has been a lot of traders saying what a good atmosphere there is in the city. Things feel different this year than other years,” she said.

In the run-up to the turning on of the lights, Ms O’Donnell said there has been two “very good” weeks for shopping, “and the city has beared up really well.”

The attendance at this year’s Christmas lights celebration was well up on previous years, as spectators witnessed a spectacular 45 minute show.

“Limerick people have woken up to the fact there is something really good happening in the city, and I think we saw that with the turning on of the lights. It was a really good, professional performance. If you do something right, you will get the benefits.”

“It just goes to show if you have the right product, and the right crowd appeal, people will come with their children. We could do with more lights - but that’s for next year,” he said.

There are a number of special events being hosted to celebrate Christmas in Limerick including the Taste of Christmas initiative.

Meanwhile, to deal with the additional seasonal demands, elves from the North Pole have set up camp in the city, and will carry out a range of duties.

These include a special ‘Elf Patrol’, where they will be double checking naughty and nice lists in preparation for Santa’s journey on Christmas Eve.

They have set up Elf Enterprises headquarters, a workshop which will sort carrots for reindeers, test Sellotape for stickiness and make reindeer flying dust.

The elves will be inviting the people of Limerick and all its visitors to come inside another workshop and sing their favourite Christmas Carol on a special stage for all by-passers to see.

And the former Ferguson’s pharmacy is to be home to the North Pole Post Office.

Each weekend here, elves will be arranging the safe delivery of all letters to Santa.

Children are being asked to bring their letter along with them, have it stamped and sent ‘special delivery’.