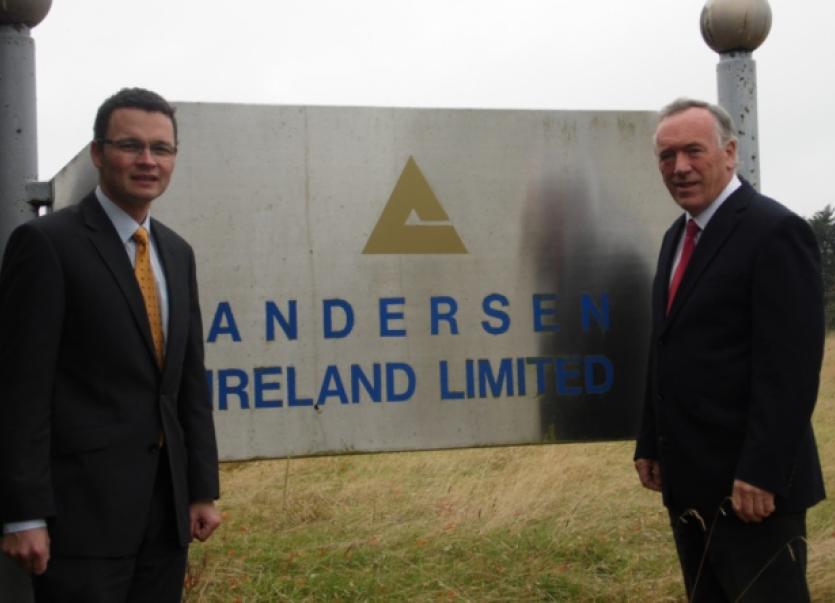 THE former Andersen Ireland plant in Rathkeale is set to become a job creation hub after it was acquired by Limerick City and County Council under the auspices of Innovate Limerick.

THE former Andersen Ireland plant in Rathkeale is set to become a job creation hub after it was acquired by Limerick City and County Council under the auspices of Innovate Limerick.

A local group made up of Rathkeale Community Council, accountant Brian McEnery, Limerick City and County Council, Innovate Limerick, Cllr Stephen Keary and Patrick O’Donovan TD was established after the closure of the plant at the end of 2013 and they recently received the news that their plan for the site had been accepted by the property owners.

Patrick O’Donovan and Stephen Keary have said they are delighted with the news that the site has been secured for the local community.

According to Cllr Keary the group worked with the state agencies, government, the property owners and the local authority to secure the site. “Throughout the process we have not made any announcements or statements because we did not want to jeopardise the whole project. However we all believe that it is important that people know that this process has been going on for a number of months and we are glad to see it being successfully concluded,” he said.

Mr O’Donovan paid tribute to Brian McEnery and Limerick City and County Council through their new venture Innovate Limerick without whose help he said the project could not be delivered. “Since our first meeting a huge amount of time has gone into trying to get this project over the line. We were very lucky to have professional advice given to us on a voluntary basis and this made a huge difference to securing it.”

He added he expected the centre to be up and running “in the near future”.

Mr O’Donovan had special praise for Rathkeale native Brian McEnery. “His expertise in this was invaluable,” said the Fine Gael TD.

Mr McEnery said he was delighted with the news. “Coming from Rathkeale I could see at first hand the devastation that was caused when Andersen closed, so I wanted to help the community move forward.”