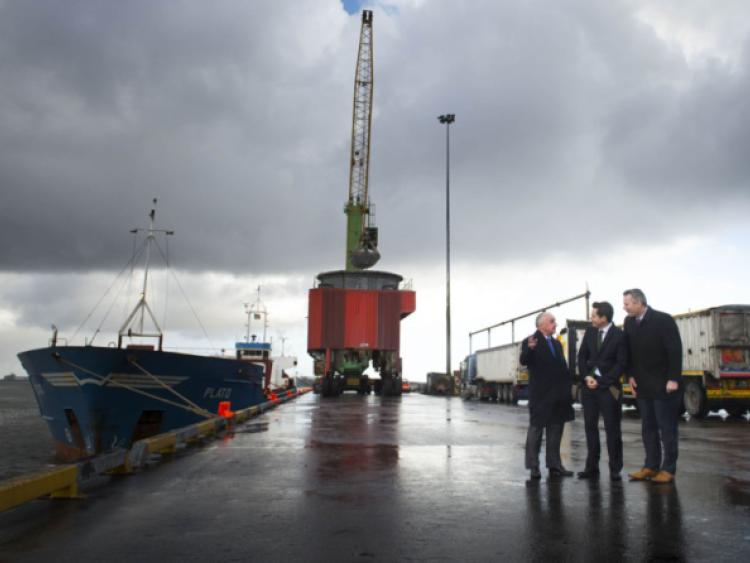 THE Shannon Foynes Port Company has secured €3m in EU funding, the bulk of which will be spent on building a new East Jetty at the Limerick port.

THE Shannon Foynes Port Company has secured €3m in EU funding, the bulk of which will be spent on building a new East Jetty at the Limerick port.

But some €800,000 has also been assigned to examine the feasibility of restoring the rail link to the facility.

The East Jetty and the restoration of the rail link are part of the port company’s 30-year master plan, Vision 2041. Earlier this year, a seven-year investment plan of €50m got underway and work began on developing the East Jetty which is expected to cost €12.5m.

The €3m funding has come under the Connecting Europe Facility, which has rolled out a record €13.1 billion investment plan for 276 transport projects across Europe. The port company was one of some 700 applicants for the fund and invested considerable time and effort in making the application.

The work on the East Jetty will completed in two phases. The first phase, which has begun, will involve the construction of a retaining wall along berth six, the removal of the existing viaduct and the infilling of 14,500 square metres behind berth six to create substantial new open quay storage.

Preliminary work will also take place on phase two, which involves linking the East and West jetties but construction of phase two is not expected to begin until 2019.

The company has repeatedly made clear that it sees the restoration of the rail link as important for the continuing and future development of Foynes and of the estuary generally.

The 25-kilometre stretch of track is currently very overgrown and the feasibility study will have to examine each of the 84 structures (bridges, level crossings etc) along the route, test them for safety and carry out detailed site investigations.

Foynes is the only strategic port on the West Coast of Ireland and has a very important role to play in the development of the Mid-West and the West, Fine Gael TD Patrick O’Donovan said this week.

“This is fantastic news for County Limerick and is a huge investment in the port,” he said, welcoming the announcement of the €3m funding.

Deputy O’Donovan, who is a member of the Oireachtas Transport Committee, said the funding comes at a very important time for the port.  Pointing out that the Government had named Foynes as a port of strategic national importance along with Dublin and Cork, he said: “I have always pushed the case for Foynes. I make no apology for the fact that since I became a TD I have been a strong advocate for the development of Foynes Port because I recognise the potential of the port and the Shannon Estuary to drive economic growth and job creation in County Limerick. This strategy has worked, and this funding will drive that progress even further.”

Confirming that the Shannon Foynes Port company had been approved for funding, MEP Deirdre Clune said: “This is incredible news for Limerick and reaffirms the port as a serious player in the European marke. It will mean more business and investment for the region as the port develops into a world class facility.”

She estimated the jetty project would generate between 60 and 100 jobs. A decision on the preferred route of a new road linking Limerick and Foynes is expected sometime later this year.