Limerick auctioneers have €7.5m worth of land for sale 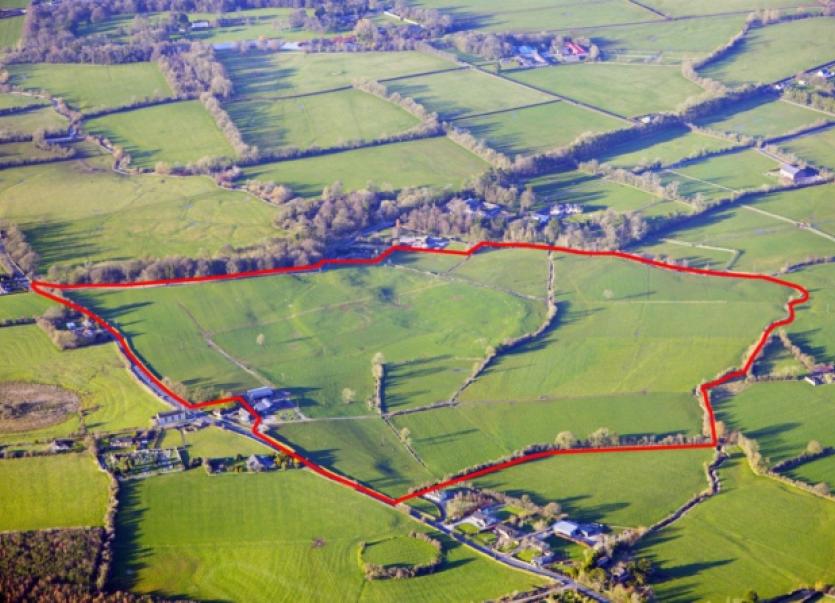 LAND sales are hotting up with GVM bringing up to 750 acres to the market either by auction or private treaty.

LAND sales are hotting up with GVM bringing up to 750 acres to the market either by auction or private treaty.

Mr Ryan said the land “was as good as you will find in County Limerick” and he was very pleased with the price achieved.

This week auctioneer John Flynn sold 65 acres at Grange Upper, Newcastle West. It was due to go for auction next week but thanks to healthy interest Mr Flynn said it was sold prior to the auction.

So with those recent prices there is certain to be interest in GVM’s some 750 acres.

One of many exciting holdings is 78 acres in Ballingaddy North, Kilmallock. There is a slatted shed for 60 cows and 10 unit milking parlour on the best of land. Bulgaden Castle is sure to be packed on Friday, May 8, at 3pm for the auction. There is 17 acres at Cringer, Knockainey; 15 acres in Gotoon, Hospital; 79 acres in Rathcannon, Bruff; 53 acres in Newtown, Pallaskenry; 82 acres in Toberyquin, Ballyneety.

“This is indeed one of the finest holdings to have come to the market in this area for some time,” is how Mr Crosse described Toberyquin.

There is 77 acres in Herbertstown; 92 acres in Courtbrown, Askeaton; 41 acres in Adare; 9 acres in Ballylusky, Patrickswell; 22 acres in Mountshannon Road and 19 acres in Fedamore.

Over the Tipperary and Cork borders there is 10 acres and a refurbished Georgian residence and guest house in Donohill, Cappawhite and a superb residential equestrian property on 83 acres in Boherbue, Co Cork. There is more on their books. Please contact GVM for full details and whether they are being sold by auction or private treaty.

“We are very much in the land selling season. April and May are very busy months for land sales,” said Mr Crosse.

With the abolition of quotas there is understandably a lot of interest from the dairy sector.

“Particularly if land is close to them or within striking distance, or even if they can meadow land, bring it home and use all their home land for grass purposes,” said Mr Crosse. Mr Ryan says a big bearing on the value of land depends on the farmers within the area.

“If you have land that a dairy farmer bounds on and he can turn his cows out and milk off that land - it is invaluable to him. Whereas if it is five miles down the road he is not as keen about it,” said Mr Ryan.

“The more modest, poorish land is more difficult sell. The gap is widening a little bit between the good and the moderate,” said Mr Crosse.

“It is still steady as it goes - there are no records being broken. Richie got a very good price last week [Rockhill, Bruree] but that is the exception rather than the rule. We are still saying to ourselves if we are 10 grand an acre we are at the tops of it.

“The difficulty people are finding, particularly with auctions, is to try to get the bank approval in place before the sale. They are having to fulfil certain criteria attached to the loan, people mightn’t be ready on the day of the auction to bid.

“Banks need to move a little quicker in terms of issuing loan approval to farmers. An auction campaign is normally four to five weeks but we are pushing it out to six weeks to give people a little bit more time to get sorted, or if a farmer wants to sell a bit to buy a bit of land - it gives him a bit more time,” said Mr Crosse.

Many auctions are planned to come in ahead of the cut off date for single farm payment submissions.