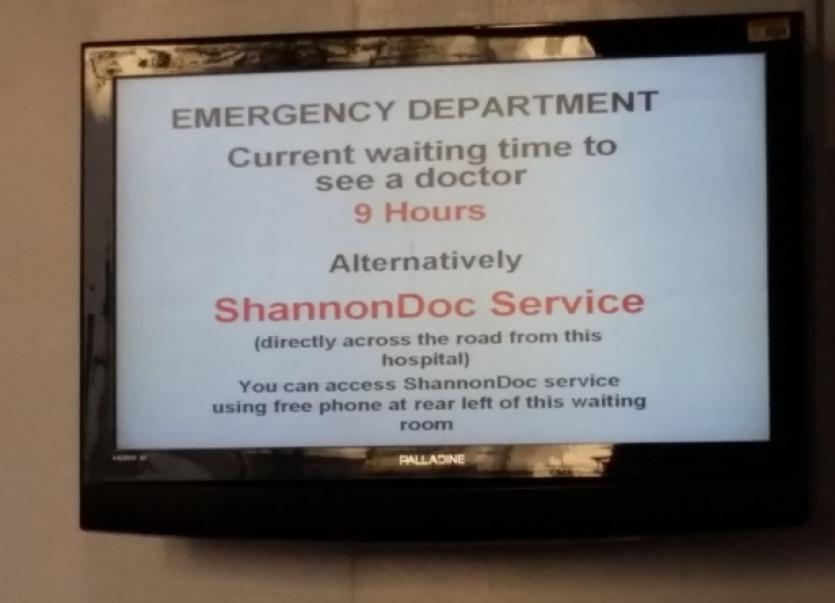 CONDITIONS at the emergency department at University Hospital Limerick have been described as “horrendous” by a County Limerick man who waited for 12 hours with his elderly mother on Friday night and Saturday morning before she was seen by a doctor.

CONDITIONS at the emergency department at University Hospital Limerick have been described as “horrendous” by a County Limerick man who waited for 12 hours with his elderly mother on Friday night and Saturday morning before she was seen by a doctor.

And the situation had improved little by Saturday evening when, as the picture taken at around 7.30pm shows, patients in the ED were advised of a nine-hour wait.

Management concedes there is a bed capacity issue at Limerick’s biggest hospital and they are “seeking to identify opportunities to relocate existing services to provide additional bed capacity”.

Deputy Kieran O’Donnell has proposed relocating the acute medical assessment unit (AMAU) and putting a 30-bed short-stay unit there to alleviate pressure on the ED. Minister for Health Leo Varadkar is “extremely concerned” about overcrowding in Limerick and has ordered a new report on the issue from the HSE, according to Deputy O’Donnell.

A man from Caherline who spoke to the Leader this week said his mother’s GP had referred her to the ED last Friday and they had arrived at 3.45pm.

“She was seen in triage within about 10 minutes and she didn’t see a doctor then until 4am Saturday morning. If we hadn’t gone looking to be seen to, we would probably still be sitting there. It was absolutely horrendous in there on Friday night,” said the man, who did not wish to be named to protect his mother’s identity.

She is still in hospital with an undiagnosed condition that appears more serious than the lesser ailment originally diagnosed by her GP.

After triage, the woman had been ushered into a small waiting room inside the security doors.

“It is a really small room with about 10 hard uncomfortable seats, particularly if you are elderly like my mother, who is in her 80s.”

His mother, he added, had become anxious about remaining in the room after two younger men arrived, one of who appeared “very agitated” with the other getting sick into a disposable container.

“I spoke to one of the nurses and she said: ‘Look, there is nowhere else’ so I actually had to remove her then and took her out to the main reception area.”

They had remained there until 4am, when she finally got to see a doctor. She then saw a specialist before being sent back to the ED and wasn’t actually admitted on to a ward until 24 hours after she had arrived in hospital.

“I had approached them I would say four or five times regarding how long it would be and they basically told me it was life before limb, which is fair enough. But what really annoyed me was the fact that she was sitting in A&E for 12 hours before she saw a doctor. It was incredibly busy in there. Inside around the triage area, you would barely walk with trolleys and people. It was a terrible situation to see,” he said.

The Limerick Leader contacted the hospitals group this week for comment on any report ordered by Minister Varadkar into the ED and on Deputy O’Donnell’s proposal to relocate the AMAU.

“UL Hospitals has acknowledged that the current ED is in need of a major redevelopment,” a spokesperson stated.

“UL Limerick has an extensive capital project underway with a budget of €20 million to build a new emergency department. The construction of the new ED is underway and will be completed in 2016 and will provide the most modern ED services in Ireland when it opens.

“In the interim period, whilst the new ED is being built, the executive management team in UL Hospitals has undertaken a number of measures to alleviate the pressure on the current ED and to address the overcrowding.

“These include a new 17-bedded short stay unit, the opening of acute medical unit and a new surgical assessment unit.”

Ennis, Nenagh and St John’s each had local injury and medical assessment units to which GPs could refer patients for “unplanned injuries and suitable medical conditions”.

“UL Hospitals have also reviewed their management structures and processes to improve patient discharges and hospital transfers,” the spokesperson said.

And a shortage of beds could indeed by addressed if management can relocate existing services elsewhere.