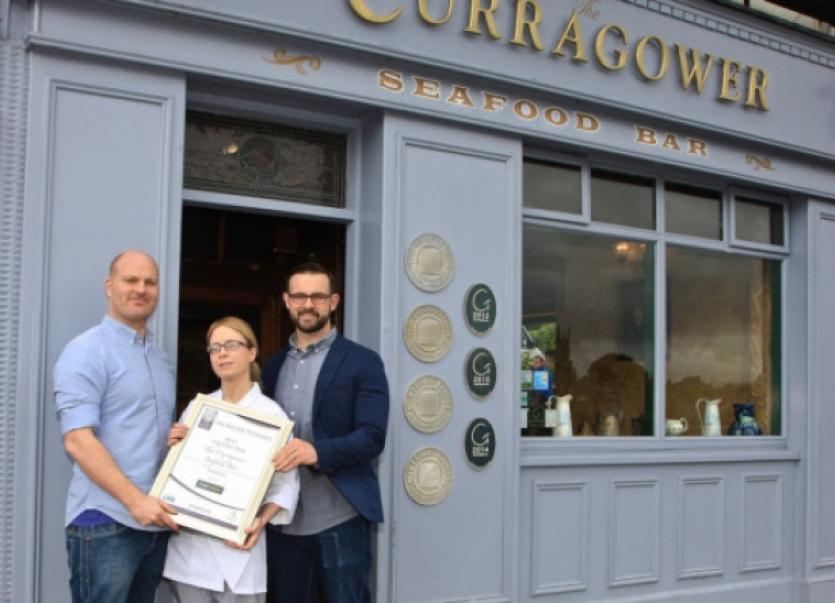 A DEFINITE upturn in the hospitality industry is being reported by restaurateurs and pub owners across the region.

A DEFINITE upturn in the hospitality industry is being reported by restaurateurs and pub owners across the region.

More people are eating out and drinking in the last 12 months according to anecdotal evidence, while a growing number of tourists are visiting the city and county.

The Curragower Pub’s Brian Murphy told this newspaper that the recent boardwalk improvements and refurbishment of King John’s Castle has led to a “fantastic” increase in business for the popular bar, which does food seven days a week.

The bar are celebrating taking the Best Gastro Pub in Limerick award in the recent Munster regional winners of the Irish Restaurant Awards 2014.

“It is a nice one for us,” said Brian, who runs the bar with business partner Cian Bourke, “but doing the best casual dining that we can possibly do is our goal, with high quality, fresh, locally sourced produce.

“It gives us that bit more of a seal of approval and is a bit of a reward for all the hard work that has gone into it for the last five years.

“The upturn in the economy and the city is helping and there is a great buzz in the city now. The last two years has seen that improve and all the work that has been done on the boardwalk and the castle has been fantastic for us.

“We have definitely noticed a big improvement - especially the Castle last summer when the work went in, there was defintely a major uptake there in tourism.”

The duo are expanding their kitchen and are hiring more staff, so intend to add to their considerable menu over the summer.

The nearby Strand Hotel is home to the River Restaurant, where chef Tom Flavin won the Best Chef in Limerick award at the restaurant awards - the Munster finals of which were held in the Strand itself at the end of April.

The chef has now won the award two years running and will go forward to the national finals in June in the DoubleTree Hilton Hotel seeking more glory.

The chef intends to “showcase the best of Limerick” at the awards, attended by over 800 industry professionals from around Ireland.

“I am hoping to bring something of Limerick to Dublin, because we will have the perfect opportunity to showcase what we have here,” he explained.

“I am hoping to do a starter of Limerick ham or something like that.”

The chef, who has been ever present in the River since it opened over seven years ago, said of the award: “It is great to get the recognition. Everybody deserves it really because it is a hard, tough game, but to be picked as the one is great.

“I am delighted to be going forward to the awards, especially because I am doing the course. It showcases Limerick and gives me a chance to highlight the good suppliers we have around.”

Tom said that the upturn in the economy was noticeable “for the last year and a half”.

“Business is tough in Limerick, there are a lot of hotels and competition is high, but we can see people are out more, families are out more,” he said.

All of the regional winners will now go forward to the national awards ceremony on June 9.